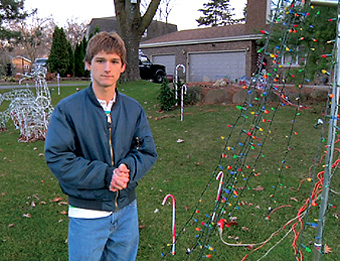 One of our favorite things to do this time of year is drive around and see all the beautiful Christmas lights. Hopefully these stories will enhance your holiday season.

One of our favorite things to do this time of year is drive around and see all the beautiful Christmas lights. Hopefully these stories will enhance your holiday season.

The best decorations around Chicago

And, while Edsey says families shouldn’t miss the well-knownholiday displays at the major Chicago landmarks, she also has foundsome lesser-known treasures.

“In the Drake Hotel, there’s a village made out of gingerbreadthat the chefs make with trains surrounding it,” Edsey says. “Andat the Hilton Chicago there is a life-size gingerbread house thatschoolkids help them make in the lobby.”

Tucked into the lobby of the 181 West Madison Building is aholiday display complete with a train kids can ride for a limitedtime on weekends.

If you want to put the kids in the car and head just outside thecity, the neighborhood of Lincolnwood Towers in Lincolnwood offersplenty of houses decorated for the holidays. Often referred to asSauganash, the neighborhood off Devon Avenue just west of the Edensexpressway has a three-story Christmas tree that pops through aroof and a tree house decorated with Disney characters.

For another amazing holiday display just outside the city, Edseyrecommends heading to Rosemont, where practically the whole town isdecorated. “Donald E. Stephen Park off of Higgins is just fabulouson both sides of the street,” Edsey says. “Park and walk overthere… It’s a gated community, but tell them you want to see theChristmas lights. They have six little houses with scenes insideand live animals from a farm kids can pet.

“The whole town of Rosemont, they decorate practically everytree and you’ll see surprises all over town, like a Santa peeringover the roof of a shopping mall.”

If you want to eat in a restaurant filled with holidaydecorations before trekking out to see the big displays, Edseyrecommends visiting Butch McGuires at 20 W. Division St. (but getthere early before it becomes more bar-like) or Marie’s Pizza at4127 W. Lawrence. Both have a festive atmosphere filled withglittery decorations for the holidays.

Or consider trying one of Edsey’s tours. She takes her riders tovarious decorated homes where they not only have a chance to seethe decorations, but often the home’s owner will board the bus andtalk about their work.

When Zach Gebis was 16, he saw a synchronized light show onlineand asked his parents if he could try something similar. Little didhis parents know their son’s talent would soon be viewed bythousands of visitors who heard about his holiday lightdisplays.

“When I showed them the videos, they were like, ‘OK, if you cando that, go ahead,'” says Gebis, now 19 and a freshman in college.”They weren’t quite expecting me to get such an amazing show as Igot.”

Gebis uses tens of thousands of LED lights, synchronized to acomputer program that turns them off and on in time to music for ashow that’s not only stunning, but also a lot of fun.

The light show covers his entire home and lawn in West Chicago.He estimates one minute of music programming takes him about eighthours of set-up, and each year he has new ideas to make the lightshow bigger and better.

Surprisingly, his neighbors haven’t complained about the lights,music and the thousands of visitors who make their way past hishouse each Halloween, Christmas and Fourth of July.

And as far as any possible calls to police to complain? Nothingto worry about. “The sheriff’s office actually came by one time towatch it because another officer saw the display and they wereoutside watching the show,” Gebis says. “It was quite amazing.”

Gebis isn’t content to just have people drive by. The teen wantsto understand what appeals to them the most and what makes themstop, get out and enjoy a closer look.

“I use a very sophisticated surveillance system (which he, ofcourse, installed himself) that has artificial intelligence thatcounts the cars that drive by, cars that stop and how long,” Gebisexplains.

The system tells him what the light show is doing when thevisitors are there, so he can assess what keeps their interest andwhat makes them drive past without stopping.

Recently, he decided there could be other uses for thesurveillance system, so he installed one at his grandmother’s houseso the family can remotely monitor her and make sure she’s OK.

“I’ve started programming software so other people can do thisas well,” Gebis says. “She likes it and she was OK with the idea.She said she’s willing to be a test rat.”

And while Gebis’ family is willing to support his endeavors,right down to the electric bill that comes with having a son who’sa genius at light displays, for the most part, technology issomething they just don’t get.

“In fact, my mom and dad do not know how to send an email. Theyhave to have me put a DVD on,” Gebis says.