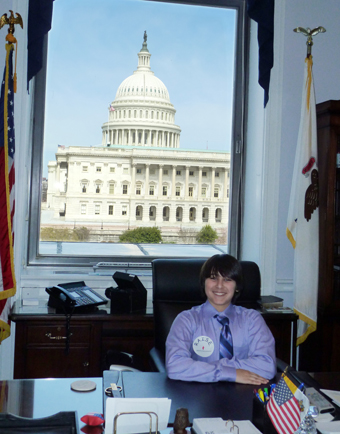 Jonathan Ramirez had his first seizure at 2, terrifying him and his mom, Gwen.

Best advice received: You are your
child’s best advocate. Most people don’t understand epilepsy, let
alone all its effects. It’s up to me to educate and help others, to
best help Jonathan.

The one thing you have learned as a parent of a
child with special needs: That there will be
temporary setbacks and ups and downs-you have to see them as just
that, make adjustments and keep moving forward.

Your worst day: The first time
Jonathan had a seizure. He was so little and I didn’t know how to
console him and help alleviate his fear because I felt so helpless
and scared myself. It’s a terrible feeling to feel powerless to
help your child.

Your hope for Jonathan’s future:
My hope is that epilepsy will not define Jonathan, that he will
choose his own successful path in life which will not be limited by
the disorder, and maybe one day he’ll be seizure-free for good. I
am proud of his willingness to discuss epilepsy and help those who
have it-he’ll tell you himself that he has epilepsy, epilepsy
doesn’t have him.

The seizures now strike most often in his sleep, so for many people who see him, he is just a typical 12-year-old boy who loves his Pug, Cash, swimming and playing at Portage Park in his Chicago neighborhood.

But Jonathan thinks people should know more about him and the thousands of other kids and adults who have epilepsy. This spring, he took a big step toward sharing their stories as the Epilepsy Foundation of Greater Chicago’s representative for the national Epilepsy Foundation’s annual Kids Speak Up advocacy and awareness event. He told Illinois’ congressmen about the neurological disorder and urged them to find ways to raise money to stop it.

“People just don’t know about it and they don’t understand,” says Jonathan, who felt honored to be Chicago’s voice.

Since then, he lobbied his school, William P. Gray Elementary in Chicago, to host an epilepsy awareness seminar in conjunction with the Epilepsy Foundation of Greater Chicago. In May, he spoke to 565 students.

For Jonathan’s mom, it is all part of a journey they started together after that first seizure.

It’s been a scary journey so far that at times left her feeling helpless to help Jonathan and forced to fight for extra help for him at school, since the seizures and medications have left him with memory problems.

But she says she couldn’t be prouder of her boy and his big heart.

“He likes to get his voice heard.”