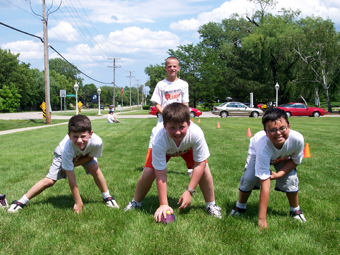 The Chicago Bears 2011 season is up in the air, courtesy of an NFL labor dispute, but you can tide your gridiron-crazy kids over with a week at a Chicago Bears official camp this summer.

At 27 locations around the city and suburbs, kids ages 6 to 14 can spend a week learning from professional coaches and educators and picking up pointers from former Bears players.

The camps are non-contact, welcome news for parents amid mounting safety concerns over the long-term effects of football on the brain.

Searching for a cure for summer-camp monotony? Check out our 5 Coolest Camps aroud Chicago

“In June or July, there’s no reason that kids need to be putting helmets and shoulder pads on,” says Tom Finks, the camp’s director and son of former Chicago Bears general manager Jim Finks. “The vast majority – I’d say 85 percent – of (football) instruction can be done without any kind of contact.”

Intead, kids will work on the fundamentals: running routes, throwing and catching and defending. Accelerated skills programs are available for kid 10 and up who have previous football experience.

Campers won’t see Devin Hester or Jay Cutler, but a group of players that mom and dad might remember, from Al Harris to Keith Van Horne, will be on hand for coaching, support and, of course, autographs.

“They aren’t necessarily marquee names, but these guys are fathers, family men, and they get great reward from teaching kids through football,” Finks says. “At the end of the week, we really see them turn into heroes for these kids.”

The five-day camps cost $389, though financial aid is available. For more information and a complete list of sites, or to register, go to bearscamps.com