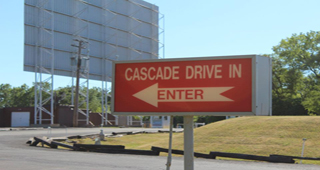 Pull into the parking lot of the Cascade Movie Theater and it feels like you’ve gone camping with the neighbors. Children toss Frisbees and play tag while moms and dads turn brats and burgers on charcoal grills. Lawn chairs are set up, blankets unfolded, and pillows plumped. If you’ve never experienced a drive-in movie theater, it’s time to pack up the car and head to Cascade’s “Movies Under the Stars”in West Chicago. And don’t wait-Cascade is the only remaining drive-in theater in the Chicago area.

Drive-in movies were originally invented by Richard M. Hollingshead of New Jersey using a radio, a 1928 Kodak projector, and a sheet tacked to the trees in his backyard. The first drive-in theater opened in New Jersey on June 6, 1933, to a showing of the 1932 film “Wives Beware.” Admission was 25 cents per car and 25 cents for each person.

Some things have changed since that first theater opened, but the concept is still the same: a double feature viewed on a giant screen from cars arranged in rows in a big parking lot.

First opened in 1961, Cascade has parking for more than 1,200 cars and from April to October, it offers a double feature seven days a week, rain or shine. The dialogue can be heard through stereo radio sound or classic in-car speakers. All new digital projection is scheduled to be installed by the end of May, promising an even better picture.

Arrive early and grill dinner on the BBQ grills provided for use by movie patrons (personal grills are not allowed and you must provide your own charcoal for use on theirs). If you don’t feel like cooking, Cascade offers food concessions.

The Ultimate Bucket List Before Your Kid Starts Preschool

Looking for a fun evening out with the family? Get a drink at one of these places.
Read more
Guides