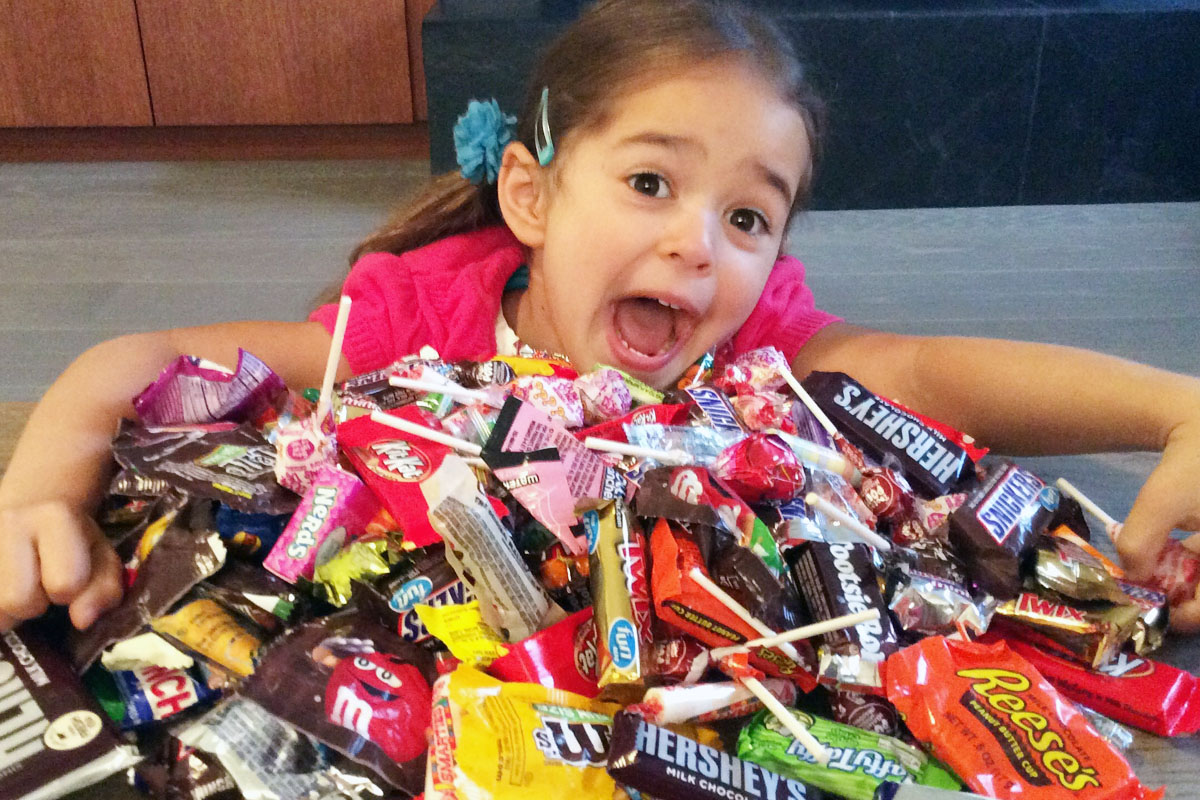 This week’s blog post is by The Paternity Test co-host Matt Boresi, who lives in the Edgewater Glen neighborhood of Chicago with his wife (“Professor Foster”) and their 5-year old daughter, Viva, who will eat whatever candy you put in front of her–but especially chocolate eyeballs.

It’s November 1, the day when parenting media all across the country begins a great ceremonial hand-wringing over what families should do with all the candy they collected.

Halloween gets bigger each year, after all, and that means a bigger confectionary haul every year. There were so many trick-or-treating and Halloween celebration options around Chicagoland this year I had to make a spreadsheet–and we worked that spreadsheet for every fun-sized candy bar it was worth. We have enough candy to rake up and jump into.

But surely we don’t want that evil candy around, tempting us and getting the kids all wired, right?  We need to do something with all this high fructose corn syrup and stat. Perhaps donate it to children in need of cavities? Hot glue it into a giant chocolate cornucopia for Thanksgiving?  Mail it to the troops? (Though I suspect that by the time they reach an aircraft carrier off the coast of Yemen, these Hershey bars will be a melty blob.) What’s a parent to do?!

I, for one, am going to eat the hell out of this candy. So is my daughter. Not before meals or bed, mind you, but after school and after supper. (Oh, maybe before meals and bed, too, but it’ll be gone soon enough.) I’m going to eat it in the car. I’m going to eat it at work. I will eat this candy on a boat. I will eat this candy with a goat.  And I will work out slightly harder, drink some water and it probably won’t move the needle on the scale much. I’ll catch Viva with a chocolatey mouth a few times she wasn’t supposed to have a chocolatey mouth, scold her, she’ll ignore me, and the world will keep right on spinning. Candy is awesome.

So, now that I’ve solved the problem of what to do with all this candy, I’d like to examine it. I’ve set one piece of each discrete type of candy she collected on our kitchen island. There are 36 different pieces total.  Here they are, from grossest to tastiest:

This is an abomination. It’s not a sucker. It’s not an apple. It’s on a stick but you can’t really lick it. It tastes like glue and it seems angry. Last.

This isn’t a normal, chocolate-ish Tootsie Roll, and it isn’t fruit, either. It’s more like some Brach’s monstrosity. Stay brown, Tootsie Rolls.

For as much talk as there is every year about poisoned candy, there’s only been one real candy poisoning. It was in Texas in the ‘70s, and the candies that were fatally tainted were Pixy Stix.

If that isn’t reason enough to skip eating them … what are these things? A straw full of sugar, that’s it? That’s so obnoxiously bald faced in its decadence as to anger the Gods.

It’s not candy, it’s just an ingredient. I cannot abide.

Everything by Willie Wonka is gross. And both movies stunk. There, I said it. Gene Wilder, RIP, but these are nasty.

Not Taffy, and I’m not laughing.

This will be heresy to many of you, but I don’t get Starburst. It this supposed to be sour? Supposed to taste like fruit? Too bright. Nasty candy.

A beloved historical favorite for some, a hard pass for me. A chocolate-ish sucker? Gross. A chewy center? Why would I want to switch consumption modes half-way through?! Because a wise old owl and a poorly drawn turtle told me to?

The highest ranking Tootsie thing on this list is the traditional roll. But it’s still pretty low. Is this supposed to be chocolate? Caramel? Mud? This tastes like candy people probably enjoyed before there were fun-sized regular candy bars. Perhaps the WWI generation loved this stuff, but they had their taste buds burned off with mustard gas by the Kaiser.

You’re not fooling me, Skittles–you are NOT M&Ms. You’ll never be M&Ms, and you shouldn’t be allowed to be shaped like M&Ms. I will not taste the rainbow.

Speaking of fake M&Ms … or are they fake Whoppers? They are kind of chocolate, kind of malted, kind of nothing. They only made it to 22 because they remind me of the Halloween of my childhood. Then again, so do Satanic panics and costumes that are just plastic smocks of Boss Hog.

Another too sweet, too sour Willy Wonka. Again, listed higher for the nostalgia factor. One taste too me back to the early ‘80s where I cried about the Challenger all over again.

Tacky contemporary licorice. I like my licorice a nice antique black, like a mouthful of anise-flavored rope, not this stuff.

Sweden, you gave us ABBA and these things. We should declare war.

We now reach the part of the list where I start liking stuff. Dum-Dums may trigger memories of immunizations at the doctor’s office, but other than that they are a lot of fun. Except the Pina Colada ones, which just remind me of the time I was tired of my lady, but then we rekindled our relationship through irony and the classified ads.

Cheap chocolate with no features to distract from its cheapness.

My wife will be furious (she loves them), but these things are an aftertaste nightmare. Still a candy bar, though, so No. 15.

I’ve never really understood eating mint as food, but these are small, so at least they are refreshing.

Sorry, Sixlets, these are the king of malted spheres.

Just nougat? That’s all you got? It’s like they forgot to finish the recipe.

There’s something kind of trashy about Butterfinger–like Fritos or Dr. Pepper or Pro Wrestling. Still, it coats your mouth with sugary oil and keeps you coming back for more.

These are mostly air from the crisped rice, so you get to eat more of them. That’s just science.

The fanciest of the candy bars available from school fundraisers.

Wasn’t sure where to put this old girl. Almost made No. 1, but in my head it’s more of a meal replacement than a treat because it really satisfies. Hungry? Try a Snickers. Damn, they’re good at advertising.

I’m putting the cups and the pumpkins here. Any shape–all great. And great for you, too.

It’s got crunch, it’s light, you can share it. Nice jingle, too.

Speaking of sharing … although you can’t really share the fun-sized ones. That’s all right, I hate sharing.

Tough to decide if this was No. 1 or No. 2. Could be either. The important thing is that they are better than Skittles and Sixlets.

As good as regular M&Ms, but with the nutritious goodness of peanuts. Keep ’em coming.

There you have it. The definitive list. Feel free to weigh in with your incorrect opinions.

And now, if you’ll excuse me, I’m going to eat most of my kid’s candy.