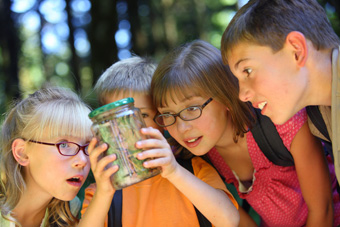 I remember the afternoon when one of our girls, a toddler at the time, brought me a treasure from our yard clutched in her chubby hand. Holding her fist up to my face, she opened it to reveal a balled-up roly-poly bug. Instinctively I shrieked and knocked it from her hand. She looked up at me, her eyes wide in shock. Then she let out a long howl. I had rejected her gift. I felt like a more miserable creature than the one I’d discarded, even as the shivers continued to tickle my neck.

I can’t stand bugs. When our third daughter was born, I was secretly relieved to have escaped the job of mothering boys. I reasoned, as the mom of three girls, that I would not have to dodge requests for lizards, snakes and other creepy crawlies. I imagined all the times I wouldn’t have to feign interest in some icky creature just to be supportive.

Then my husband stepped in. He asked me to stifle my instinct to scream, cringe or otherwise react negatively toward bugs. He was determined, girls or not, that his children would not inherit my squeamishness around creepy crawlies. Instead he encouraged them to get up-close, touch and enjoy little creatures of every kind. And he insisted during the early years that I hide my creeped-out reactions.

If I wanted my girls to avoid being trapped by the fears that sent me scrambling at the sight of a tiny spider, I had to face those fears.

I had to at least pretend to embrace the wonder of insects.

Since then, I’ve learned to nod appreciatively (from a safe distance) at night crawlers dubbed as pets and carted around in bike baskets.

I’ve housed and fed caterpillars, dumping their droppings and watching them go through various stages until they became butterflies. And I’ve even gone so far as to allow amphibians to live in our house-a pair of dwarf frogs that, thankfully, never leave their aquarium habitat.

My days of masking my fear (or accidentally not) are gone now that my girls are safely beyond catching it. At this point they are well aware of my dislike for everything insect- or lizard-like. For them it’s become a source of amusement. I regularly find revolting plastic specimens hidden under my pillow, to which I respond with mock cries of horror. In return I’m rewarded with a chorus of muffled giggles.

Like many other aspects of parenting, it hasn’t been easy, this journey toward raising girls who love what I can’t stand. But there is a satisfaction in knowing I played a role in creating room for them to learn that love. And there’s an even greater satisfaction in finding success in my efforts. After all, what parent doesn’t want to give their child a better life than they had? Even if it’s as simple as giving them a life free from a fear of bugs.