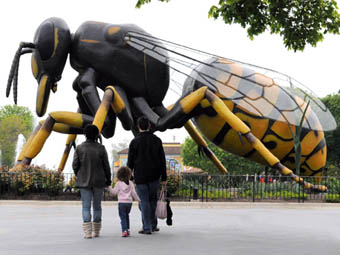 In 2008, Stingrays pooled their resources and came to the Brookfield Zoo. Then sharks joined them in 2009. In 2010, dinosaurs took up temporary residence. Who can forget the giant dinosaur that moved and roared right next to the Theodore Roosevelt Memorial Fountain?

And now it is time for some of nature’s humblest, but equally important creatures to have their moment in the sun. Or shade, if they like it that way.

“Xtreme Bugs” arrived at the zoo May 19 and will be crawling around through Sept. 7. However, you won’t have to get out your flashlights and magnifying glasses to find some of them. These bugs will be right in your face, so to speak.

All in all, nearly 130 much larger-than-life insects will be multiple-eyeing you. Some of them don’t just stand or lie around, either, like cicada husks. Twenty-two of the state-of-the-art animatronic bugs spring into action.

But before you enter the Xtreme Bugs exhibit, be kind to the black and yellow Japanese hornet, just a little north of the Theodore Roosevelt Memorial Fountain, on the grass. Try to show no fear. After all, he’s only 33 feet long and 16 feet high – only 250 times the size of a normal hornet. But he moves and buzzes.

Then head over east to the exhibit, in the very same area once the home of the dinosaurs. See the 45-foot diameter aster flower with the giant bee inside and hiss back at the hissing cockroach, a mere 42 times normal size.

Ever seen a ginormous Monarch butterfly with a 13-foot-long wingspread? There’s one here so big you could ride on its back. Unfortunately you can’t. This Xtreme kind of butterfly doesn’t come with seat belts. Or even a baby seat. Maybe you could bring your own parachute … if the butterfly doesn’t eat it first. Or you. Bring milkweed and make a friend!

Don’t miss the anxious ladybug who seems to have locked herself out of her specially-detailed Volkswagen Beetle.

If being around big bugs “bugs” you too much, you can visit and learn about live creepy-crawlies at “Harry’s Big Adventure: My Bug World!” You can interact with some of them in their habitats, getting up close and personal with them. Find out the many ways that insects get along in their surroundings and how they affect you.

“They taste like sunflower seeds” is the general opinion of those who dare to try them, a reporter found them to have more of a pumpkin seed flavor.

The Bug Chef will also be preparing Red Beans and Yikes! where the rice is replaced by waxworms. Got your mouth watering yet? OK, how about sampling 6-Legged Salsa? The salsa is replaced by boiled mealworms.

If you’re lucky, maybe you’ll be there in time for the Cinnamon Bug Crunch (fried waxworms with cinnamon sugar) or the Chocolate Covered Crickets. Everybody loves chocolate, right?

Inside the 5,000-square-foot tent is “Harry’s Big Adventure” (Harry is a Chinese praying mantis from Memphis, Tenn.), and it’s here that the wonderful world of bugs really comes alive. A Chinese rose-haired tarantula is waiting to greet you. Go ahead, touch him, and pet the giant millipede, and don’t forget the vinegaroon.

For those who like sports, Madagascar hissing cockroach races are also held on weekends. Want to get the kids busy for a little while? Put them on the 10- by 20-foot Spider Web Climber. Or maybe the kids would rather be bug detectives, and conduct their own pest inspections of a small house. Lab coats and white safety hats are provided.

At “Harry’s Big Adventure,” it is revealed that bugs have even invaded our vocabulary and culture.

“Sometimes people use bug vocabulary, and they don’t even realize they’re doing it,” said Andre Copeland, interpretive programs manager for the Chicago Zoological Society. “Like ‘the bee’s knees,’ ‘snug as a bug’ and ‘butterflies in my stomach.’

“Take a look at comic books, in regards to heroes. In the 1940s, there was the Green Hornet. Today, he’s still in the movies. I can’t go anywhere without people saying ‘Spiderman! Yay, Spiderman!’ And in the 1990s, there was, on TV, ‘Space Ghost’ with Zorak the praying mantis as the smart sidekick. The list goes on and on.”

So if your kids are bugging you about going somewhere this summer, scuttle on over to Brookfield Zoo. Bring all your relatives; even your ant.

Brought to you by Pilgrim Lutheran School
Read more
Education