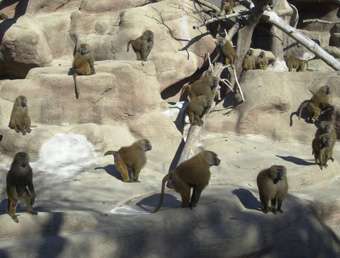 Sad news reported by our sister newspaper Riverside-Brookfield Landmark … Brookfield Zoo announced Friday that another of its longtime outdoor exhibits is slated for demolition and redevelopment.

Baboon Island, the man-made mountain just inside the South Gate and home at one time to more than 70 Guinea baboons, was quietly closed last week after its three remaining inhabitants were euthanized “due to quality-of-life concerns,” according to a press release. The baboons ranged in age from 22 to 27 years old.

The exhibit, originally called Monkey Island, dates to the mid-1930s. It will be demolished in 2014 to make room for an as-yet unnamed exhibit.

“Whatever we do will be a ground-level exhibit, whether it’s like the Great Bear Wilderness where acrylic panels allow visitors to get up close, we’ve just not decided yet what we want to do there in terms of what kind of species,” said Bill Ziegler, senior vice president of collections and animal care.

The mountain will be demolished and the area filled in and covered with topsoil and grass until a determination is made on what to do with the area.

Demolition of Baboon Island is just part of a host of changes happening on the south end of the zoo. At the end of September or early October, Brookfield Zoo will open its Conservation Education Learning Center inside what used to be the old Reptile House.

Meanwhile, during the winter a new reptile exhibit will be opening inside the old Perching Birds House. Also this winter, said Ziegler, the former Children’s Zoo will be demolished to make way for an exhibit called Wild Encounters.

Slated to open in 2015, Wild Encounters, said Ziegler, “is geared toward engaging guests directly with animals.”

Monkey Island is nearly as old as the zoo itself, built originally to house a colony of Rhesus monkeys. Over the years, the island has been home to Malay bears, antelope, meerkats, monitor lizards and – during one summer after they were confiscated at a local airport – a few Nile crocodiles.

But for decades the colony Guinea baboons, which were introduced to the zoo in 1938, delighted adults and children alike. The baboons’ familial habits and the fact that they weren’t shy interacting with humans made them a must-visit.

But in 1992, following the recommendation of the American Zoo Association’s Species Survival Plan, Brookfield Zoo stopped breeding the baboons and their numbers steadily dwindled.

“They became a phase-out species [in zoos], for others that needed conservation efforts,” said Ziegler. “They are still a very common baboon. They are very adaptive to human habitats.”