Discovering the joy of breastfeeding after nursing didn’t come naturally 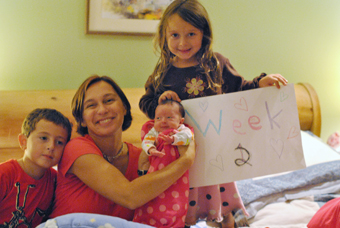 To say that nursing didn’t come naturally to me would be an understatement. It took me three children to get it right.

I could blame my difficulties with breastfeeding on a postpartum encounter with a La Leche coach. But the truth is the undiplomatic witch was just an excuse to give free rein to my terror of breastfeeding.

In my first few days of motherhood, I was terrified. Terrified of falling into postpartum depression. Terrified of starving my near-term infant to death. The fact that I would be able to keep from dropping my baby on her head seemed like too much to hope for.

I reached for the bottle. The label was right there, guaranteeing the nutritional content my child needed. I spent the next year regretting my decision, crippled with guilt that I had permanently eliminated any chance of admission to Harvard by withholding that magical IQ-enhancing, immunity-boosting elixir.

Yet, even after all those guilt-ridden days, when I gave birth a second time, to a son, I chose not to breastfeed. “Give him some formula,” I told the hospital nurses, “and you can keep him for the night.” I wanted to rest up, to get as ready as possible to split myself in two, to pay attention to the potty training of my jealous 2-year-old while caring for a newborn. A few weeks later, when he turned colicky and started screaming from 10 p.m.-2 a.m. every day, I regretted my decision.

It wasn’t until I relinquished all control and had a third child that I finally experienced the peace and joy of breastfeeding. It became my only escape, my time to bond with my third child. I nestled deep into our couch with my perfect little girl and other distractions faded to the background. More often than not, our peace was interrupted by my other children, demanding that I pick a winner in some desperate toy dispute.

I’m sure those baby days were more hectic than the idyllic moments I nostalgically longed for, but those moments of breastfeeding bonding that it took me so long to achieve are my most treasured memories of early motherhood.

Every time I caressed my belly during this fourth and final baby, I looked forward to continuing our bond through nursing, but it has not come easy. Sophie’s tiny preemie mouth was too weak to latch on and I spent our first six weeks together juggling pumping and lengthy bottle feeding sessions. Instead of cradling with tiny Sophie in the corner of the couch, I hooked myself up to a machine while my older kids looked on with alarm.

Then suddenly, last week, the stars aligned and Sophie latched on. No crying, no screaming. Thirty minutes later, she fell asleep, full and peaceful. As REM sleep took over, her mouth relaxed into a broad, gummy smile, and finally, I let a tear flow.