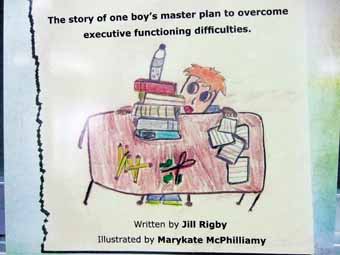 When occupational therapist Jill Rigby found herself in meeting after meeting trying to explain executive functioning disorder to parents, she started writing it down instead.

“Three times a year we have parent-teacher conferences and the big issue that kept coming up was, ‘Your child has executive functioning disorder,'” says Rigby, who works at a school in Northfield. “Parents were confused about what that meant.”

So Rigby began writing out simple explanations in layman’s terms of the disorder, which is the inability to transition, organize and adapt to activities in your day.

Before she knew it, she was writing a book about the disorder, called “I put it right here I swear!”

The book begins with explaining a day in the life of a boy with executive functioning disorder and how he feels. “He keeps getting yelled at and he keeps losing things,” Rigby explains.

The book, illustrated by Rigby’s 17-year-old daughter, who also struggles with the disorder, is available through amazon.com.

Brought to you by Pilgrim Lutheran School
Read more
You

How busy moms can really — and should — make time for themselves.
Read more
Sponsored Content

Brought to you by Chicago Parent advertising partners
Read more
You