Letting go of the pressure of hosting a Pinterest-perfect party 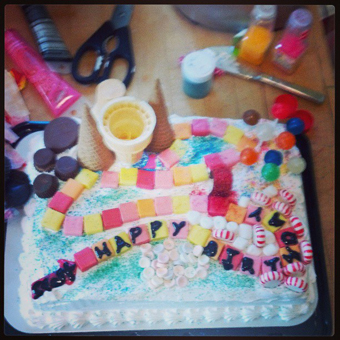 I had a problem with getting in over my head when it came to parties long before Pinterest came around. I even went online to order previous missed years of Martha Stewart Weddings magazines when planning my wedding, my husband still doesn’t know how much those cost! I love throwing a party and pulling together a theme or idea.

However Pinterest has upped my crazy just a little bit. Since I planned my first birthday, a tea party for my then four year old, I’ve used Pinterest to take my party planning obsession to new heights. How crazy have I gotten?

Well I planned a Goodnight Gorilla Tea Party for my two year old 3 weeks before I was having my baby. I was literally sewing tutus as the guests were arriving. I somehow, miraculously managed to get my 8 year old son and my 6 year old daughter to agree on a party theme. Since they go to the same school and have several siblings sets in their classes I wanted to do a joint party but she is all things girly and he is all things LEGO and we were at an impasse. Pinterest to the rescue! The kids agreed to do a Candyland theme on one condition, I had to make a 3D cake that duplicated the board, as seen on Pinterest.

All I wanted was to convince them to have a candy bar instead of gift bags! I didn’t want to have to come up two sets of bags for two ages and genders (my son’s class is 98% boys) and now I was facing the mother of all birthday challenges recreate a Pinterest image at home. So I did what any stubborn type A person would do, I waited until the last minute {today} and headed off to the store to buy more candy than I have ever bought before.

After dropping the plain white cake in the parking lot (true story) I set off on my mission. My husband came home and saw the cake, the kitchen covered in candy wrappers and the table covered in packages of candy (for the candy bar) and just shook his head. “You have lost it. This is just too much!” I just shook my head, no, no I am grounded in reality. See I was also going to make cookies shaped and colored like the gingerbread playing pieces, and make candied marshmallows and make the kids playing piece t-shirts and I’ve cut at least two of those from my plans. He laughed and left the room.

The truth was I was out of time, my sewing machine is buried and I want the parents at school to talk to me again. Besides my kids saw the cake, half finished and were so excited. That’s really what it’s all about. It’s about seeing their faces light up and be delighted in something coming together just for them. When I was growing up we never had birthday parties. At least not the kind with friends, and games, or at locations. I have an opportunity to give my kids something I missed out on and for me that’s both a joy and a challenge.

I truly love throwing them parties and planning out the theme. The challenge is to keep my grand plans in check and not fall down the hole of ideas that you can find on Pinterest. It’s to keep the perspective that this party is not for me and I am not inviting a magazine or Martha Stewart. It doesn’t need to be over the top perfect, it has to be just right. Just enough to make them smile and say thanks mom, this was the best day ever!