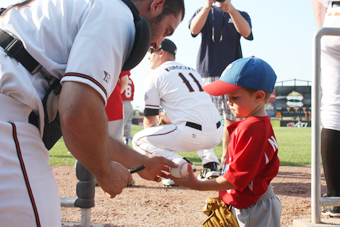 Tammy and Eric Weech describe themselves as the type of people who take in “strays,” whether it’s an abandoned dog or a teen having a rough time at home. So when they heard about the need for families to host players on the Schaumburg Boomers baseball team, “it was kind of a natural fit for us,” Eric says.

Four years later, the Weeches have hosted numerous players, as well as some wives and girlfriends, in their Itasca home. They currently have two players, outfielder Sean Mahley and pitcher Tyler Ware, living in their busy household, which also includes their two grown daughters, a son-in-law and two grandchildren (ages 4 and 1)-plus their dogs Rocky and Daisy.

“We’ve been used to the house being busy,” Eric says. “Now as we’re getting a little older and the kids are starting to move away, it reminds us of our whole life and just being filled with stuff to do.”

Most minor league teams in the Chicago area recruit local families to host their players. The Boomers simply ask families to provide a separate bedroom and bathroom for the player. Other chores, like cooking and laundry, fall to the player.

The Weeches’ players always have been “really capable” at taking care of those things, so Tammy and Eric see their role as being parent figures, providing a place of respite from the sometimes-crazy world of professional sports.

“We’re trying to give them a sense of normalcy,” Eric says. “They can come here to a safe haven and get some normalcy. If they just want to play PlayStation, they can play PlayStation. Whatever the dynamics are to keep their sanity.”

It also sometimes involves providing support and encouragement-especially when a player’s had a bad game or gets traded or cut from the team, which frequently happens at the minor league level.

The Weeches have stayed in touch with many of their past players.

“You develop a relationship,” Eric says. “It’s not, `your tenure here is done, see ya later.’ If we bond with you, you’re part of the family.”

It helps that they say they’ve only had great ballplayers so far-respectful adults who enjoy being part of family life.

“They’re good role models,” Eric says. “A family with younger kids can see someone who’s going for their dream… They’re doing a great thing for someone who’s up and coming”

Most hosting gigs come with season tickets, so baseball fanatic families can enjoy highly interactive, lively games, plus the thrill of seeing someone you know out on the field. But the Weeches say the intangible perks outweigh any number of game tickets.

“You’re proud of what they’ve accomplished and you hope for nothing but the best,” Eric says. “It’s nice to see that you can be a part of someone’s journey.”