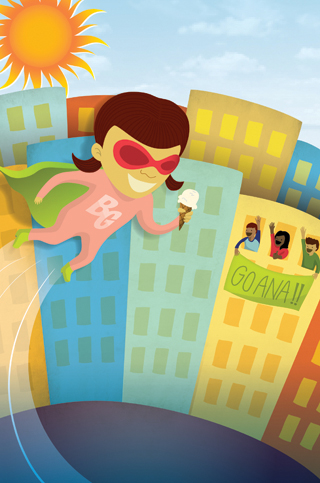 You’ve heard of Superman and Batman, but it’s time for a new crime fighter to join the ranks of your family’s favorite superheroes.

Chicago Playworks for Families and Young Audiences presents “Barrio Grrrl! A Musical,” a coming-of-age story centered around 9-year-old Ana Ortiz, who lives with her abuela while her mother is serving in Iraq, and her alter ego Barrio Grrrl. Joined by her imaginary friend and sidekick The Amazing Voice, Ana uses her superpowers to protect her barrio and preserve justice in this fun, colorful and energetic pop musical.

Andrea Tichy, manager of public relations and special events, says Chicago Playworks always tries to reflect the urban environment of Chicago and that this play truly does. Your kids will love that Ana is growing up in a city just like they are and don’t be surprised if they sing her favorite songs all the way home, Tichy says.

Chicago Playworks also knows their younger audience members may not have the longest attention spans and keeps the musical, written by the same author of the book In the Heights, at 90 minutes.

“I think it’s a really great experience for the whole family,” says Anna Ables, director of marketing and public relations. “That’s one way where our show is sometimes different. It’s entertaining and engaging for all ages.”

Ables says “Barrio Grrrl! A Musical” is a great option if this is your child’s first experience at the theater.

ASL interpreted performances will be held Thursday, May 10, and Saturday, May 12. Tickets are $8. Buy tickets at (312) 922-1999, theatreboxoffice@depaul.edu or theatreschool.depaul.edu.

Chicago Parent Staff -
Grab some snacks and enjoy these fun family flicks at a park in the city and suburbs.
Read more
Attractions