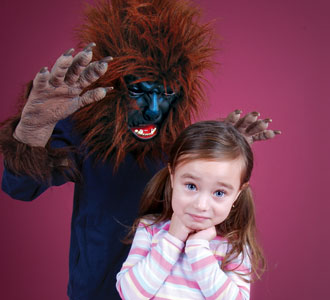 Chicago dad Francisco Iacobelli can spend any given night fighting off a menacing giant. When his son, Esteban, spots the creature in the nighttime shadows, Iacobelli uses his hands and a magic flashlight to make him disappear.

While Esteban, who is almost 3, has been worried about monsters for a few months now, this particular giant has been popping up ever since he first read about him in a book.

“He always sees monsters in the shadows. Any shadow at night will be the giant,” Iacobelli says. “When we’re telling a story and going to bed, he’ll say, ‘Oh, look, there’s the giant.'”

Esteban’s fears aren’t unusual. Many Chicago area parents are battling their own versions of the boogey monsters haunting the night.

“This is just a normal part of a child’s development,” says Dr. Ada Wainwright, a psychology professor at the College of DuPage who specializes in parenting issues and the social and emotional development of children. “Their minds are active and they are going to encounter things to be fearful of.”

But it’s finding ways to manage these active imaginations that can sometimes stump parents.

For Iacobelli, thinking like his son and understanding where the fear comes from has been the best tactic. And at least one study suggests that this is a good way to approach younger children. “Get into their imaginations and put a twist on it so that they feel more in control,” says Dr. Liat Sayfan, lead author on a study about children’s fears that was recently published in the journal Child Development.

Sayfan’s research began after her own struggles with nighttime monsters. When her son was 4, his fear of witches, monsters and ghosts made every bedtime a struggle. After trying several techniques to calm him down, she found that the best way to deal with his fears was to pretend that they were scaring the monster together. She armed him with a magic sword to protect him at night and told him that the house had a wall around it to keep him safe. But when Sayfan shared her nighttime monster-slaying routine with a friend who had a child the same age, she disagreed. “She told me, ‘Now he’s going to think that they truly exist,'” Sayfan says.

To settle the dispute, Sayfan set up a study where she lectures at the University of California Davis to test children between the ages of 4 and 7. She found that what works can sometimes depend on how old the child is.

The younger children, for instance, were more likely to suggest pretending that a scary witch was actually a friendly one or that you had locked her up and thrown away the key, while the older children would say that witches don’t exist.

Taking this research into consideration, Sayfan’s suggestion for younger children is to stick with the imaginary by flipping a situation into something less scary, like pretending the monster is actually a baby monster that lost its parents and is hiding under the bed. Then, the next morning, discuss what happened the night before to help your child begin to sort the fantasy from the reality. “Talk about it when they’re all calmed down and reiterate that it’s not real,” she says.

This separation between fantasy and reality, though, can be difficult for young children who are learning how to manage and regulate their emotions, Wainwright says. “They’re getting better and better at it, but controlling fear and anger are hard to master,” she says, adding that this makes nighttime fears a great opportunity for parents to help children learn to work through these feelings.

A good place to start, Wainwright suggests, is by taking the fear seriously. “If you tell them it’s not there, that’s not going to mean so much to them. Make a big deal about it,” she says. “Let’s check the house. Let’s check your closet, under the bed. Make sure there’s definitely nothing there.”

And to limit the fears in the first place, try to restrict books, movies and television featuring frightening characters. Her own son, for instance, required a nightly monster check after he read Where the Wild Things Are.

“If they don’t know about it, they’re not going to think about it,” Wainwright says.

Yet sometimes, scary characters can pop up when parents don’t expect it.

Julie Newman, a mother of two in Aurora, for instance, thought her daughter Maddie, now 9, would love watching “The Little Mermaid” when she was 5. Instead the film’s villain, Ursula, terrified her.

When Maddie told her mother that she was afraid Ursula would come into her room at night, Newman and her husband tried several reassurance techniques before coming up with the idea to help her write a letter to post on her door. “The overriding message was, ‘Stay out of my room,'” Newman says. And a few years later, when she had similar fears about the characters from the PBS show Noddy, Maddie wrote the note on her own.

“For her, it was an empowering thing, especially when she wrote it herself, to take control of the situation,” Newman says. “There was this letter on the door. They weren’t going to bother her.”

While Maddie now understands the difference between what is real and what isn’t, her 4-year-old brother Casey is having some of the same nighttime fears of characters. This past Christmas, for example, he was anxious about Santa Claus, but took comfort when he realized he wouldn’t come near his bedroom on the second floor. So when he remembered that last year the Easter Bunny hid their basket in the upstairs closet, the family came up with the plan to leave a note this Easter to tell him that he must stay downstairs.

“Young kids can view things so differently,” Newman says. “Something seemingly so innocent can really trigger a bad negative response.”

Sometimes, though, children’s nighttime fears leave the realm of fantasy entirely, and they start to worry about a real person breaking in at night or a fire burning the house down.

When this happens, Wainwright suggests making a household safety check part of the bedtime routine. “If they have a fear, then you brush your teeth, put on pajamas and lock the doors together every night,” she says. “Then go upstairs and read a story.” And make safety precautions visible in your home, she suggests. Let them help you to change the batteries in the fire alarm or go around the house together to double check that all of the windows are locked.

But for exasperated parents who haven’t yet found the right way to handle nighttime fears, rest easy-Wainwright says this is a phase that typically peaks between ages 3 and 6 and usually passes. “Over time, you want the fear to go away and for your kids to be good sleepers,” she says. “From my experience, these things don’t last too long.”

Chicago Parent Staff -
Have a spooktacular time with your family thanks to these local events.
Read more
Outdoors

Brought to you by Lincoln Park Zoo
Read more
Guides