Have you ever re-watched a movie that you’d last seen when you were a child, only to remember that your memory of it was completely different from the actual movie? Case in point: Gremlins. The last time I’d seen Gremlins was when it was released, in 1984. When I came across it on my Netflix “Movies you may enjoy” suggestions, I was reminded of the cute and fuzzy Gizmo (I oncehad a stuffed animal of him!)and the nasty Gremlin (forgot hisname) pulling a few silly tricks here and there, andI thought – Perfect movie for my 9 year old! 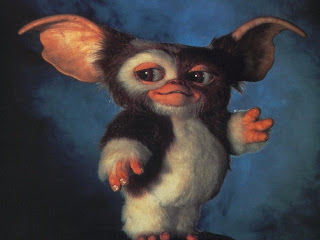 Well, I had forgotten about the science teacher being murdered then dragged under a desk by the Gremlin with the mohawk,about the mom blasting another Gremlin to death in the microwave, aboutthe Senior Citizen being ejected violently from her staircase lift, out the window, where she died in the snow, Kate’s holiday depression over the fact that her father died while dressed as Santa Claus and attempting to crawl down a chimney, the drunk policemen (latermurdered offas well). Whereas I remembered Gremlins as a cute kid’s movie, it’s really adark horror/comedy primer for kids. Which means my son and his friend loved it.

(Looking around for more info on it, I was not so surprised to discover that itwasheavily criticized forviolenceupon release.In response to Gremlins and some other movies of the era, the Motion Picture Association of America (MPAA) reformed its rating system within two months of its release, creating the PG-13 rating.)

Since the action takes place on Christmas Eve, Gremlins is the perfect tween holiday movie, a good break from all the other sappy holiday favorites.

After that hit, I’m eager to replay some other favorites from my youth: Goonies, Adventures in Babysitting, the Back to the Future trilogy. Click here to see what we’re screening tonight!

Brought to you by Chicago Early Learning.
Read more
Guides

What You Can Do to Relieve COVID-19 Vaccine Symptoms

Why does the vaccine make some people feel awful?
Read more