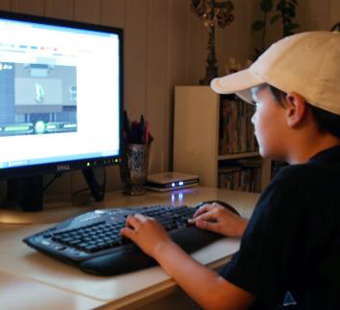 When my child was an infant, the countless sleepless nights exhausted me. Keeping up with the endless motion of a toddler wore me out. And the birthday party circuit of elementary school sucked a lot of time and energy.

Now that my child is a tween, I’m finding that new challenges exhaust me. Chief among them is keeping up with all the website and social media options available to tweens and teens today.

The number of ways that they can communicate with others, who they may or may not know and who may or may not be kind, good, law-abiding citizens, is mind-boggling. A lot of these platforms can be scary. What scares me most of all, though, are the parents who don’t even try to learn about them, or who try but give up too easily.

When our kids are little, parents do not turn on the television and plop them in front of it with the thought, “I have no idea what station this is on or what this show is about and it may be wildly inappropriate but, eh, whatever, they can handle it.”

And parents should not do the equivalent of that by turning their kids loose in the digital world without supervision either.

Parents need to know where their kids are going online.

Facebook is no longer cool, in large part because that’s where their parents are. You didn’t really think they’d make it easy on us by flocking to a site we understand and use, did you?

But it’s Ask.fm, Vine, Voxer, Snapchat and Kik where tweens and teens are flocking lately. And a lot of parents have never heard of any of them.

Ask.fm is a site where people can ask questions anonymously. Officials believe it has played a part in several tween and teen suicides and that led British Prime Minister David Cameron to call for a boycott of the Latvian-based site, saying it was ” vile.”

Vine is a video sharing site. Voxer is a walkie-talkie app for phones, Snapchat is a photo sharing app, and Kik is a free texting app.

Yes, trying to stay on top of the ever-changing social media landscape takes a lot of time and a lot of work. No one thinks to themselves that during their free time they would absolutely love to play around on those sites. Nor do they think about using that time to research and install online activity monitoring software on the family computer, or scroll through the mind numbing texts on their phones.

It’s exhausting to do that.

These snacks will put the "super" in your Super Bowl watch.
Read more
Guides

Plan ahead! We've rounded up some of the best activities and events to do with kids in Chicago and suburbs this month.
Read more
Camps

Lori Orlinsky -
Here are some ways to gauge their readiness for a new camp experience.
Read more
Travel