Dads: In offense of the Arts 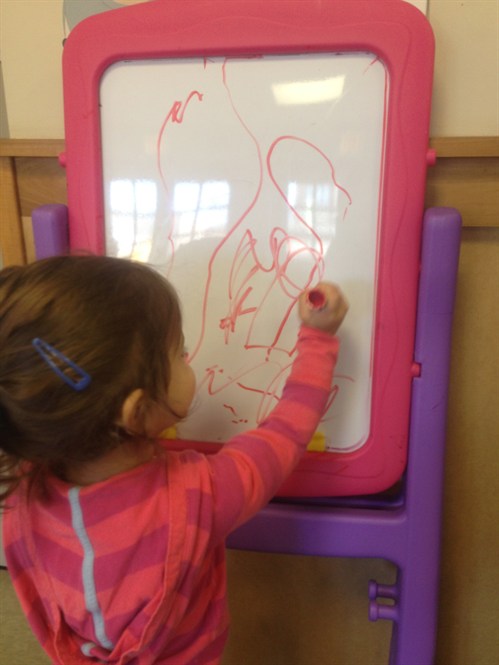 This week’s blog post is by WDP co-host Matt Rocco, who lives in the Edgewater Glen neighborhood of Chicago with Professor Foster (his non-white, non-dad wife), and their daughter Viva. Their life is an all-singing, all-dancing, waking nightmare of artiness.

The mantra of the modern parent is to broadly enrich their children – to expose them to a spectrum of activities and let them discover themselves, or follow their bliss, or awaken the giant within, or whatever.

The problem with exposing your child to a cornucopia of experiences is that they might find their true calling in something that you don’t want for them, or that you just plain don’t like. It is asking a question you might not like the answer to and if you don’t watch out, that answer might be a calling in the Arts.

That’s capital “A” arts, like Dance, Music, Painting, Sculpting, Writing, or (urp) Theater. You know, stuff that they don’t pay you to do, stuff that involves insufferable concerts you’ll have to sit through after work, stuff that will end up finding them a husband who wears scarves indoors and wants you to donate to his Kickstarter campaign to make an indie film involving a lot of mumbling.

The Arts are global, cross-cultural and expose us to the broader human condition

You know what else is global and cross-cultural?

Nobody likes that stuff. The world got smaller and we started sharing cultures and now we get sad every time we look at our Nikes because we know some blind orphan lashed to a table in Southeast Asia had to sew them with their bleeding fingers.

I used to love my Nikes.

The Arts are rooted in history

So are the Arts.

Ever been to a museum? How about the symphony? A ballet? An opera? How about a play – especially an old one? SNOOZE.

In the past, people sat on their butts for hours on end, nowhere near snacks or a bathroom, phones put away, and watched very little happen from very far away.

Then they died of cholera.

No one likes a self-expressy-pants!

Self-expression leads to weird haircuts, piercings, and voting for third-party candidates. You work hard to keep a nice home, a couple of running cars, and a stocked pantry. The last thing you need to come home to is some punk kid expressing themselves all over the place.

Young people should express themselves quietly and privately in their bedrooms after cleaning their plates and asking to be excused.

The Arts teach subtleties in perspective and problem-solving

I think we can all agree that subtle perspectives get you nowhere.

J.P. Morgan was not a master of nuance. Dale Carnegie was not a titan of innuendo. Henry Ford did not trade in delicate strokes. Ours is a country whose truths are written large and in black and white. We elect the men we’d most like to have a beer with, give reality shows to the girls with the biggest funbags and shop at the convenience stores lit with the most blinding fluorescents.

Subtlety is for the French.

The Arts create opportunities for “peak experiences” and “flow states”

“Peak experiences” are euphoric, rapturous moments, and “flow states” are energized and blissful times of full involvement. Performers often call it “connecting” or “being in the zone,” and it is addictive. It makes you “catch the bug,” i.e. forget everything you know to be smart and everything your parents worked for and move to the desert to study glass sculpture with a one-eyed master.

If you allow your child to have a religious experience in a rehearsal room or studio or on a stage, you’re allowing their mind to be clouded by joy when they should be faking community service work for their college resumes.

Your kid should have their peak experiences under the bleachers like you did. You turned out all right.

The Arts are a counterpoint to our rampant consumerism

… and therefore pay horribly. How can you market an indictment of marketing? How can you price a takedown of capitalism? The child choosing a life in the Arts is choosing a life that exists at the whim of the Rich – the people who made a living doing something NOT in the Arts and now keep the Arts alive by purchasing season tickets and putting their names on placards on the backs of chairs. If these modern Medicis like the Arts so darn much, how come they spent their lives moving money around and selling widgets? Easy for them to try live vicariously in the Arts now through rampant underwriting and purchasing overpriced drinkware in the gift shop! They chose right the first time through life.

Choosing the path to a life in the arts is choosing the hard road, “the road less traveled by,” which is something I read in a poem by a guy who was probably buried in a pauper’s grave and dissolved with quicklime.

It’s too late for me – my daughter is only 2 and she’s already pounding on the piano, practicing her “arabesques” in the mirror, and singing the opening bars of “Sempre Libera” out the window. She listens to the singers in lessons with Mommy, she goes to rehearsals with Daddy, she does diction warm-ups with actors, learns combinations for dance calls with choreographers, and has even attended a couple of lectures on the finer points of the lyrics of Oscar Hammerstein II. It’s too late for her – she’ll never amount to much. It’s not too late for you.

Act now! Hide the pointe shoes and burn the easels and shove those recorders, rhythm sticks, and anything that says “Baby Mozart” on it deep into the recycling bag. Help your child make sensible choices and avoid letting them end up with degrees called BFAs or MFAs. The F probably stands for something dirty.

Remember, you’re only one “peak experience” away from having kids who can only afford to put you in a really crappy rest home.

You can also listen atwhitedadproblems.com . (Do note that the show has a potty mouth and is definitely for Over 17 Only.) And follow the Dads on Facebook and on Twitter: @whitedadprobs.