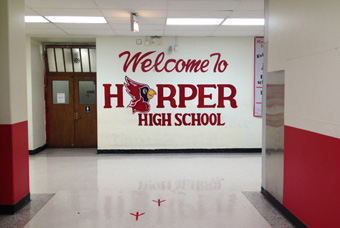 This Friday, President Obama will stop in Chicago to talk about urban gun violence, something the city knows far too much about after last year’s record homicide numbers.

To learn more about the two part series on Harper High School,
visit
ThisAmericanLife.org, where you can also here a short
promo for the episodes.

Listen to more This American Life stories on:

In an effort to better understand the communities suffering the most from climbing gun violence rates in Chicago, specifically in the city’s high schools, three reporters from public radio show This American Life spent a full semester observing and reporting at Harper.

“For everything we’ve all heard about children and gun violence,” says the program’s host Ira Glass, “there are basic things we don’t hear so much about. Like what it’s like to live in neighborhoods that have to cope with so much bloodshed. This is a school that knows this problem in a way that most of us around the country don’t.”

During their five months at Harper, the reporters recorded both sides of the school: the students and their families, and the staff and administrators. The result of their time at Harper is a two part series airing this weekend and next, Feb. 15-17 and Feb. 22-24.

In the broadcasts, reporters Alex Kotlowitz, Linda Lutton and Ben Calhoun share their experiences at Harper and what they learned about gang violence among teens.

Harper’s attendance area alone includes more than 15 gangs that operate very differently than they used to, according to the This American Life press release about the series. Many of the gangs don’t sell drugs, don’t have colors or wear caps tilted to the right or left. Most important, boys are nearly always assigned a gang affiliation, whether they want it or not, based on where they live.

“When I ask kids what their parents don’t understand about gangs these days,” Lutton says, “they say it’s this. Their parents tell them not to join a gang-as if there’s some initiation to go through, some way to sign up.” Aaron Washington, a Chicago police officer stationed at Harper, told Lutton that because the only safe way to walk home through gang territory is in a group, there’s almost no way for a kid at Harper to avoid affiliating.

To learn more about the episodes and hear a preview of the upcoming broadcasts, visit ThisAmericanLife.org.