Does my baby have food allergies? 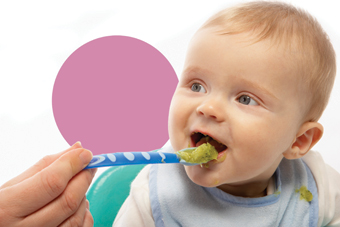 Lucy Simmons was enjoying a jar of baby food when her parents noticed something very wrong.

Symptoms of a food allergy

If you see the following symptoms, it may indicate a food
allergy. If several areas of the body are affected, the reaction
may be severe or even life-threatening. Called anaphylaxis, it
requires immediate medical attention.

“My daughter’s face swelled up, she got hives and she became very ill,” says her mom, Nicole Simmons of Orland Park. Simmons and her husband Sean rushed their 9-month-old to the emergency room where they received a life-changing diagnosis: severe allergies to several common foods, including dairy, peanut, shellfish, sesame and egg.

Any food can cause an allergic reaction, but most food allergies are caused by cow’s milk, eggs, peanuts, tree nuts (such as walnuts, pistachios, pecans and cashews), soy, wheat, fish and shellfish.

A recent study in the journal Pediatrics found that 1 in 12 children has a food allergy, with nearly 40 percent of those diagnosed reporting severe allergic reactions or anaphylaxis.

Food allergies in younger children can be especially scary to parents, since adequate nutrition is vital to a baby’s growth and development. To make matters even more complicated, other conditions may mimic food allergies. So how do you know what’s a real food allergy and what isn’t?

“Key symptoms of a food allergy reaction are hives, swelling of the face and breathing problems such as wheezing,” Pongracic says.

Tummy troubles can sometimes indicate food allergies, but more common reasons are an immature digestive system, reflux, diarrhea due to an overload of sugary fruit juice and common viruses.

One common childhood condition that may have a food allergy correlation: eczema. This skin condition, characterized by rashes, redness and itchiness, “is one of the first allergy indicators,” Pongracic says.

Getting answers about food allergies should begin with a visit to your child’s pediatrician, who can offer an alternative formula and guidelines on introducing new foods. They also can prescribe an EpiPen for emergencies.

Allergy testing is an important piece of the food allergy puzzle, but tests don’t always tell the whole story.

“Allergic reactions and anaphylaxis to specific foods are obvious indicators; blood tests and skin tests alone do not determine food allergy,” Pongracic says. “When testing is done, it should be as specific as possible.”

She especially cautions about “panel” testing in which the child is tested for a large number of foods all at once, as these tests may result in a high number of false positives.

The guidelines on when and what foods to introduce to babies has been controversial in the last few years, but recent studies by the American Academy of Pediatrics show no relation between introducing foods before the first birthday and allergic reactions to them. (The AAP does recommend holding off on peanut butter or nuts for the first year because of choking hazards.)

Experts recommend giving your baby one new food at a time and waiting at least two to three days before starting another. After each new food, watch for any allergic reactions. If any of these occur, stop using the new food and consult with your child’s doctor.

If your child’s older sibling has a food allergy or if allergies run in the family, speak to your doctor before offering your baby a possibly allergenic food. For example, a study showed that siblings of kids with a peanut allergy are seven times as likely to have a peanut allergy themselves.

If your baby receives a food allergy diagnosis, meeting your child’s nutritional needs can be difficult.

“You have to think outside the box, but luckily there are a lot more allergy-friendly foods these days,” Nicole Simmons says.

If you get really stuck, working with a nutritionist can help.

“Fruits and vegetables are my daughter’s favorite foods-my nephew without allergies won’t even touch them,” she says.