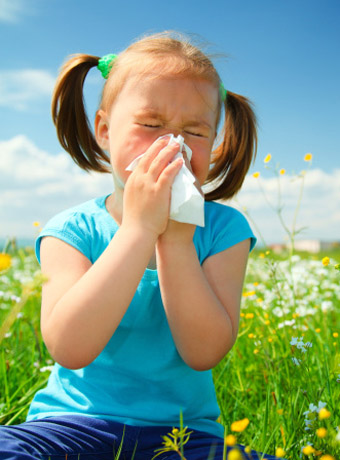 Runny noses, itchy eyes and headaches are blooming right along with spring flowers and trees. That means pollen – and lots of it to trigger allergy symptoms.

Ragweed, which normally does not appear in March in the Midwest, is already abounding even in city yards and alleys.

The mild winter took allergy sufferers into March weather that felt like July and sent allergy symptoms into high gear.

The first day of spring saw a tree pollen count in Chicago of 1,600, according to the Gottlieb Allergy Count at Gottlieb Memorial Hospital in Melrose Park. This is over the 1,500 threshold that signifies a dangerous air quality warning.

“Yes, it’s been much worse this year,” said Andrew Chapello, an analyst at Accenture in Chicago. “It’s at least twice as bad as other years.”

“This is going to continue,” Leija said. “Weather has been a tremendous help with the trees, helping to produce more pollen.” Winds spread the pollen and allergy symptoms as well.

And yet, it’s not just the sun, heat and wind that are making allergy sufferers miserable. It’s also the air itself and the city’s urban environment, Leija said.

“Carbon dioxide is increasing and pollution that is produced by cars and factories actually increases pollen production,” Leija said.

So what exactly are allergy sufferers using to treat their symptoms this season? For some, it’s a pill.

“I take daily allergy relief, like Zyrtec, and have found at times that this is not enough,” Chapello said. “When I need it, I’ll take Allegra and have found that to be the most effective remedy.”

Both are non-prescription medications.

Still, others turn to herbal supplements and natural remedies to combat their allergies. Organic food giant Whole Foods is featuring a “Be Good to Your Whole Body” program to help consumers with allergies this season.

“Although we typically feature allergy products at the beginning of April, the early end of winter weather has caused quite a bit of additional flora activity, which could contribute to more allergens in the atmosphere,” said Kara Smith, a category buyer for supplements at Whole Foods.

Leija urges consumers to be cautious when relying on natural remedies.

“While [saline] nasal solution is one of the primary things to do to alleviate allergy symptoms, there really is no scientific proof to back up herbal remedies” in general, Leija said.

But it turns out, Mom was right. Leija praised the natural benefits of honey.

“Honey is being looked at as a remedy, since it contains pollen,” he said. “Sublingual therapy, which consists of putting medicine, like honey, on the tongue, is also currently being studied for its potential benefits to allergies.”