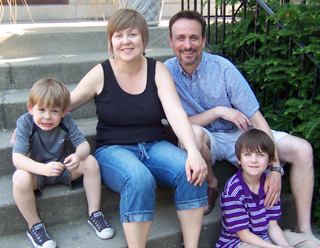 I studiously avoid joining school committees. Sure, I’ll go on a field trip or help at a class party. But when the volunteer form comes around, I don’t sign up to write the weekly newsletter, lest the project take over my life. When it comes to protecting my kids, though, it’s hard to say no.

My descent into activism began in March 2011. Over drinks one night, my friend Cindi mentioned Breakfast in the Classroom (BIC, for short). With BIC, all Chicago public elementary schools would be serving breakfast to students in their classrooms. Our school, which was serving a free hot breakfast in the lunchroom before school, was scheduled to switch to a cold breakfast-in class-in May.

When I heard this, I was outraged. Who gave Chicago Public Schools the right to decide when, where, what and how my kids should eat breakfast? Other moms brought up concerns: the lost instruction time, the mess, kids eating a second breakfast.

Cindi and I also feared for our children’s safety. Like some other parents in the group, we had children with life-threatening food allergies. If someone spilled milk on Cindi’s first-grader, he could end up in the ER. If my preschooler ate something with nuts, he could go into anaphylactic shock.

The next morning I talked to Cindi. I had some ideas to keep this program from coming to our school. I could draw on my PR background to get our message out. Was she in? She was.

The next few weeks were a blur of meetings and phone calls. We emailed the people we knew, telling them about our campaign to keep the BIC program out of our school. We met with other parents who didn’t want BIC at their schools. We started a petition.

Then we took our case to the Chicago Board of Education.

You know those people you see on the news, standing in front of a bunch of officials and telling them what’s wrong with their policies? That was us.

After our speeches, reporters swarmed us. Cindi was in the newspaper and on TV. Several of us ended up being quoted or pictured on websites and blogs.

In the meantime, dirty dishes sat in my sink at home. Laundry piled up. I ignored my husband and put off my kids so I could talk to reporters or write emails.

Then, despite our efforts, the BIC program rolled out at our school as scheduled. Some of the moms gave up. A few of us decided to give it one more shot and went to another board meeting.

Not long after that, we got some welcome news: CPS was putting a halt to the BIC program at our school and other schools where parents had protested. Kids could eat breakfast in the lunchroom, either before school or during the first 10-15 minutes of the school day. No more breakfast in the classroom.

We all breathed a sigh of relief. And, for me, the experience reminded me how powerful a grassroots PR campaign can be.

Here are some tips, if you want to change a policy in your school district.

Make friends. In our case, a loosely knit coalition of about 50 parents from more than 20 schools took part in the overall campaign.

Be consistent. We agreed on our main concerns and came up with key messages.

Play to your strengths. A core group divvied up the work: One mom served as the main spokesperson, another did research and crunched numbers, another spread the word to other parents, and two of us handled writing and media outreach.

Be prepared. We were armed with facts to support our arguments and to address counter arguments made by those who supported BIC.

Spread the word. We communicated our messages to various policy makers, including the school administration and board-even the mayor’s office and attorney general. Some parents also met directly with school-district employees who were in charge of the program.

Keep the story fresh. To sustain the news media’s interest, we focused on different points over time.

Now, more than a year later, the hours we spent on the BIC campaign are a distant memory. We have new worries: a longer school day, the threat of a teacher strike. I’ve gone back to avoiding volunteer activities.

But what’s this? I just got word that my son’s weekend school will be serving snacks in class. Sounds like they’ll need someone to start an allergy committee …

Kirsten (Schnoor) Lambert is a work-at-home wife and mother of two who lives in Chicago’s North Center neighborhood.

From Kings Island to Medusa's Slidewheel and more, here a few last-minute excursions to enjoy with the kids before the new school year.
Read more
Guides

Plan ahead! We've rounded up some of the best activities and events to do with kids in Chicago and suburbs this month.
Read more
Advice

From boogers to pen caps, here's why some kids can't seem to keep strange and stomach-turning things out of their mouths.
Read more
Sponsored Content