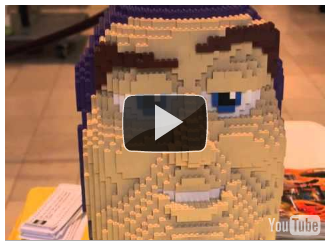 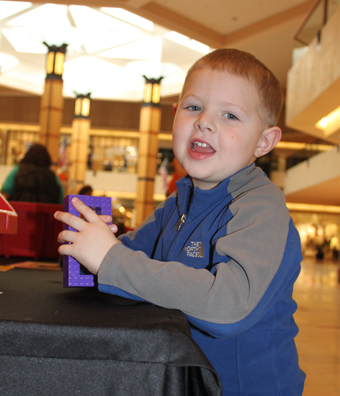 If Buzz Lightyear can go “to infinity and beyond,” how far can an 8-foot-tall Buzz go?

Find out this weekend at Northbrook Court mall, where the LEGO store is celebrating its grand reopening with abig movie star.

From 11 a.m. Friday to 6 p.m. Sunday, kids of all ages can help build a LEGO brick (or more than one) that will become part of a monster-sized Buzz Lightyear. They can also meet LEGO Master Builder Dan Steininger, who is heading up the construction.

Kids can get an idea of what the end result will look like from a 1/4-sized model displayed in the mall.

Steininger traveled from Massachusetts to be part of the festivities, and as the project got underway on Friday, he pumped up the crowd, generously passing out high fives and the slips of paper that qualify the children to receive a personalized builder certificate. He even juggled – and occasionally dropped – the mega-sized bricks before putting them into the model.

“Obviously meeting the kids is the highlight,” Steininger says. “We build these models in our office and don’t get feedback. So to see the kids react when it’s done … that’s why you do it.”

Steininger estimates he will put 25 hours of work into the model before the end of the weekend.

Jordan Childs, LEGO’s marketing manager,says he hopes that holding the event on a holiday weekend means lots of people will bring their kids out.

“We want to encapsulate what you can do in the store,” Childs says. “You get a hands-on experience and get to do something you won’t find anywhere else.”

Buzz Lightyear probably will not make his permanent residence in the Northbrook store, but he would be in good company with other models of space shuttles, sumo wrestlers – even the Tower Bridge in London.

Childs expects that many of the children who build bricks for the Buzz Lightyear figure will come back throughout the weekend, especially for the crowning moment when Steininger places the preassembled Buzz head on top of his body.

And as for the enthusiastic builders who will see a beloved film character take shape before their eyes? Perhaps they will realize that “you can make anything out of LEGO,” just as Steininger says.