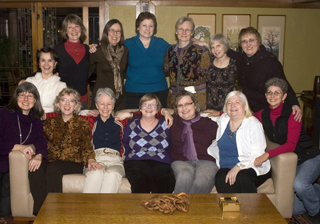 Thirty years ago, these area women formed the Moms Co-Op of Oak Park.

Phyllis Theodos made the first call. She’d read about babysitting co-ops in Parents magazine. She also had twins, which may have given her twice the incentive.

It was 1980 and Theodos had been in a Lamaze class at West Suburban Hospital with Diane Stephenson, Chris Dame, Edie Schaefer and Alice Goorsky. The fivesome formed the original Moms Co-op of Oak Park.

Evidently, they organized it well because the group just celebrated its 30th anniversary. Not that they’re babysitting for one another anymore.

The babysitting system was carefully regulated. Half-hour cards were printed up and handed over for the amount of babysitting time logged. Theodos used up one and a half cards for each half hour because it was double duty.

In the era before cell phones and answering machines became standard equipment, you kept going down the list until you found someone at home. Calls had to be made at least 24 hours in advance.

Every month, the moms met at a different home for refreshments and to share stories and ideas. It helped that Dame was a preschool teacher and Theodos a nurse.

“We didn’t have to call the doctors all the time,” Schaeffer says. “This was an important source of support and friendship since these were the first babies for each of us and most of us did not have family nearby. We shared information and concerns. It helped us reinforce our perceptions of what was normal.”

The first week of December, the moms still hold a cookie exchange, followed by a Christmas party (husbands included) on the second Saturday of December.

“It’s wonderful-emotionally supportive for the moms and the dads. It’s been great knowing the same women through all our trials and tribulations, like having a family.”

Schaeffer says the comments in the 30th anniversary party album speak for themselves: “Thirty years of fun, friendship, cookies, support and good times-parenting made better because of you all. It truly does take a village.”

Chicago Parent Staff -
Even the pickiest of eaters will love these spots in the city and suburbs.
Read more
Special Needs

Enjoy some sensory-friendly fun in the city and surrounding areas.
Read more
Outdoors