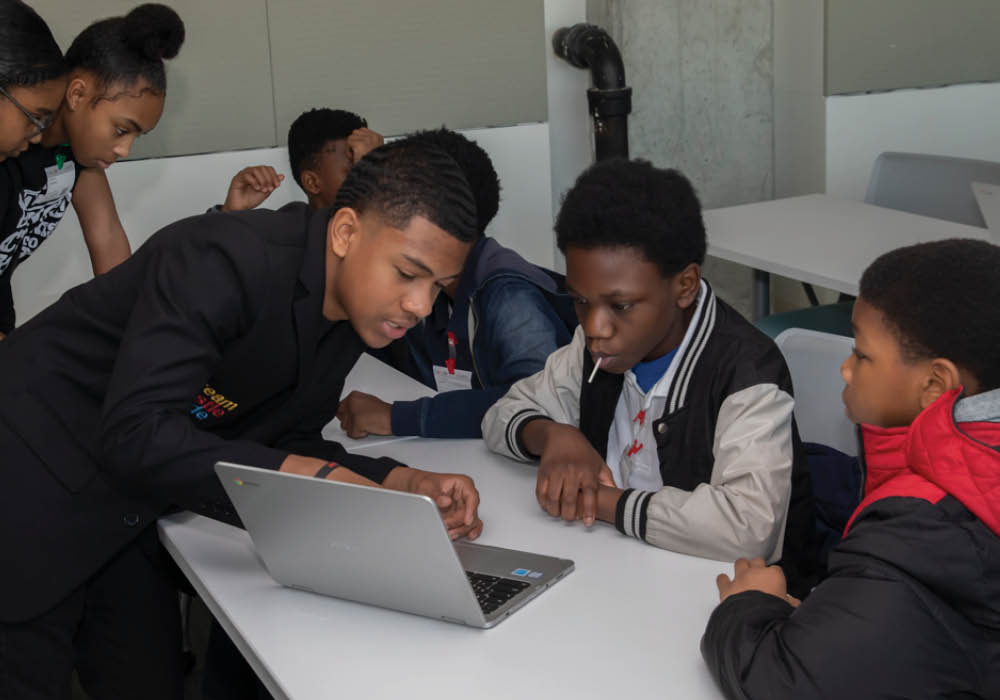 This summer, most high schoolers are enjoying downtime before the hustle and bustle of school begins in the fall.

Not Ian Brock. The 15-year-old high school junior from Pilsen is busy launching a virtual camp to teach computer science to 1,000 Black and Brown youth in Chicago.

Set to begin July 13, the New Nerd Virtual Summer Camp is a free 8-week program for fifth to ninth graders that combines computer science with personal development. For two hours each day, five days a week, Ian will introduce students to JavaScript through code with Google’s Grasshopper Application, while also coaching them how to overcome adversity.

“Kids understand kids,” says Ian, who has curated a music playlist for the class to keep it ‘light.’ “I don’t teach students. Instead, I walk them through problems step-by-step. I challenge them to use their critical thinking skills because it will benefit them long-term.”

Ian has made a name for himself as a computer science activist. In 2013, he founded Dream Hustle Code, a nonprofit organization that brings access to computer science education to youth from communities underrepresented in tech. He has also been invited twice to speak at the Google Headquarters.

“There are millions of unfilled jobs in the tech space due to there being a lack of people to hire. In Illinois, students only need one computer science class to graduate high school,” says Ian, who believes early computer science education is key for closing the gap in the digital divide, particularly among people of color. “This is the perfect time to start bringing Black and Brown people to the tech space, because there is so much opportunity for them.”

“There’s a lot going on this summer,” says Ian, who acknowledges that with COVID-19 uncertainty, many youth programs have been cancelled, leaving students at home. “This camp is not only a way to teach students a new skill that will change them for generations, but it will also keep them occupied, safe, off the street and out of harm’s way.”

In order to enroll 1,000 children in the New Nerd Virtual Summer Camp, Ian needs support from the community in the amount of $250,000. As of press time, he had already raised $10,000. Donations can be made at dreamhustlecode.com.

When camp is finished, Ian plans to take a well-deserved week off to “sleep” and “do nothing.” Afterwards, he plans to take the summer camp formula and transform it into a year-round program.

“We sit in audiences, watch Ian speak, see the people he interviews, and sometimes pinch ourselves,” says Ian’s Dad, Michael Brock. “A whole generation of kids are looking to him. Ian represents an opportunity to grab a vision for their future. When they see he can do it, they believe they can, too.”