The Book of Mormon will have you smiling 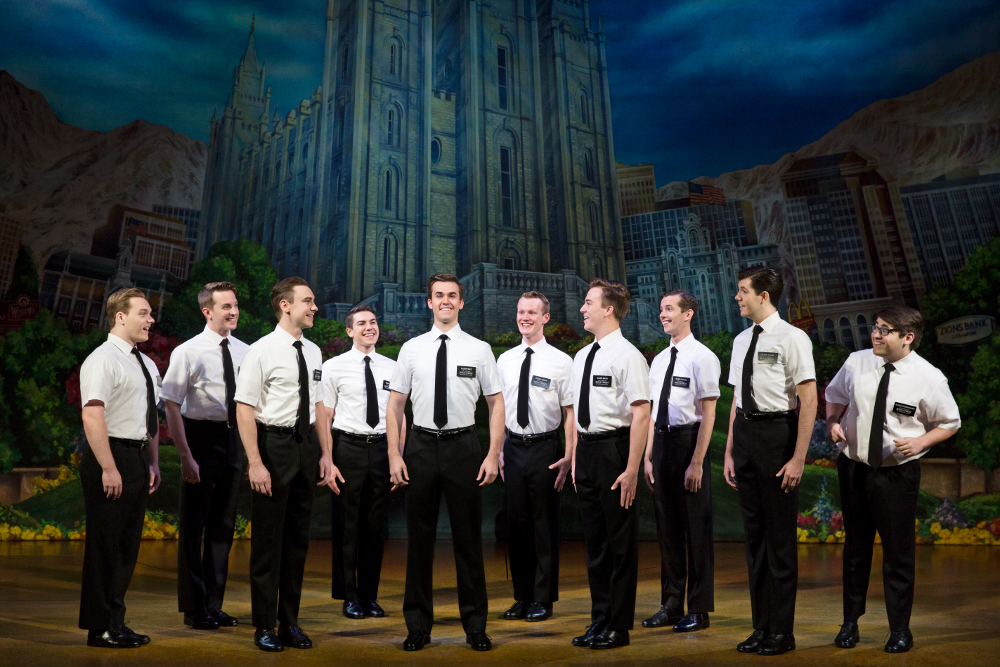 They will have you at hello.

The delightful new fresh-faced singing and dancing Mormon recruits, but especially the messily hilarious and loveable Elder Cunningham (Connor Pierson), bring Chicago much-needed 150 minutes of smiles, from the opening song and to the final song featuring even newer Church of Jesus Christ of the Latter-day Saints recruits from AIDS-weary Uganda.

The Book of Mormon hits town for just a short run at the beautiful Oriental Theatre, now until Dec. 2. And while it has brought its irreverent humor to town before, the crowd on opening night was on its feet cheering the funny poke at organized religion keeping issues facing our world in tidy little boxes you can simply crush to make go away.

The show is the brainchild of Trey Parker, Robert Lopez and Matt Stone; Parker and Stone are the creators of “South Park.”

The handsome, confident Elder Price (Kevin Clay) is the ideal Mormon who dreams his mission assignment to convert more Mormon would be in his favorite place, Orlando. Only, he finds himself “stuck” with a needy sidekick, Cunningham, in Uganda. When Price decides to walk away from the mission, one of the locals, Nabulungi (Kayla Pecchioni), seeks out Cunningham, who lavishly embellishes the Book of Mormon (Star Trek and Star Wars make an appearance) to help the locals see what the church can do to help them with poverty, AIDS, female circumcision and violence.

One of the Uganda locals facing circumcision, Nabulungi, whose name is hilariously mispronounced throughout, is simply adorable and “has a wonderful disposition.” You’ll be saying “Salt Lake a-City” as she did long after the lights go up. In fact, many of the songs will stick with you. (Download the soundtrack, it makes great road trip music.)

Tickets are going quickly for this short Chicago stop, directed by Casey Nicholaw and Parker. It makes for a perfect date night, of course, but The Book of Mormon is great for earning those cool points from your older teens who won’t be shocked at the naughty words (namely the f-word and c-word) and sexual references they hear every day in the school halls.

Note that there is a murder in the show, however, so it may trigger some people.

The Book of Mormon

When your child loses their first tooth, here's how to make the experience a special memory for them.
Read more
Attractions