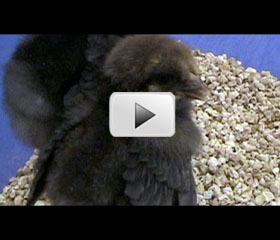 Two weeks ago, there were only 300 known auburn Java chickens in the world, which means something if you’re a chicken expert.

A pair of auburn Java chicks hatched at the Kohl Children’s Museum on April 6 and 8, and Chicago Parent stopped by to bask in their fame. Rusty and Lucy (named for Lucille Ball) spent themorning pecking at corn and mugging for the camera.Take a look:

The museum’s “Eggs to Chicks exhibit” gets its eggs fromGarfield Farms in LaFox. Most Javas are white or black, the two main strains, but Garfield Farms had told museum officials to keep an eye out for the rarer colors, like blue or auburn. But in a decade of hatching chicks, they had never seen anything but black and white.

So when Rusty hatched, the telltale wing coloration told museum staff that they had something special.

“And then we get two? Go figure,” says Dave Judy, the museum’s director of communications. “It’s like winning the lottery.”

Rusty and Lucy will stay with the other hatchlings at the museum untilApril 19. When they get older, they’ll be part of the Museum of Science and Industry‘sbreeding program, cooperating with Behl Farms in Rochester, IL to repopulate the auburn strain of the Java chicken, which actually went extinct for a while back in the late 1800s but has remained dormant in the species’ gene pool.