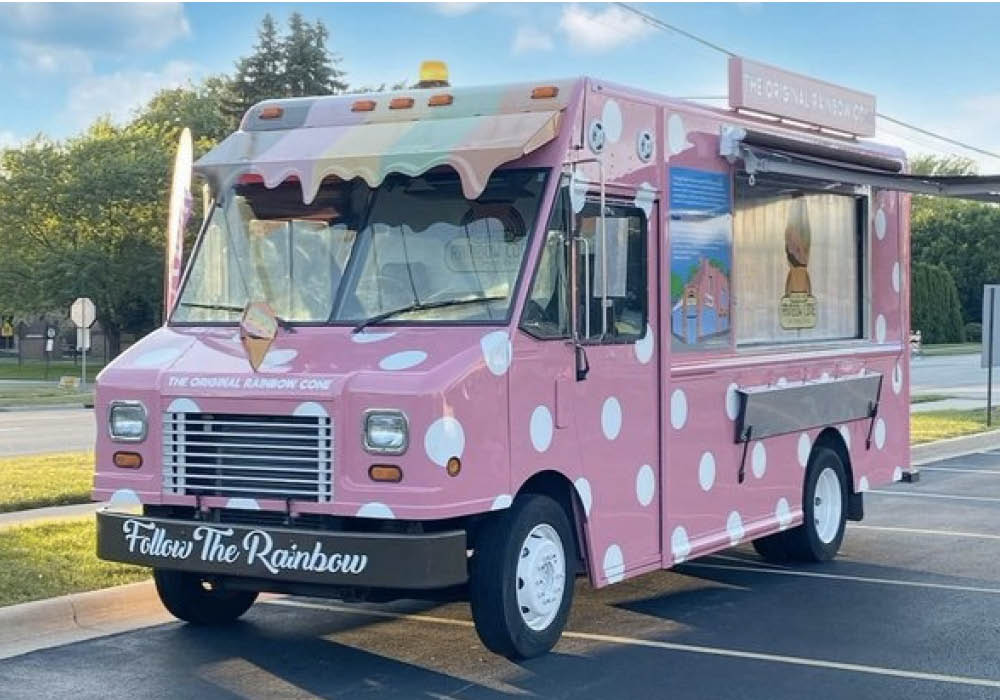 Since 1926, families in Chicago and on the South Side have made Rainbow Cone on Western Avenue a destination location.

The combination of orange sherbert, pistachio, Palmer House (vanilla with cherries and walnuts), strawberry and chocolate ice creams hasn’t changed in 94 years and has since expanded to Navy Pier.

Now, families who aren’t leaving their Chicago neighborhoods during the COVID-19 pandemic can still taste the flavors that made The Original Rainbow Cone so popular thanks to a traveling truck that is popping up around the city this summer.

Lynn Sapp, owner of The Original Rainbow Cone and granddaughter of founder Joseph Sapp, says that an ice cream truck has been in the plans for some time, but was accelerated as summer fairs and festivals were canceled.

“Everybody’s stressed and they need the rainbow!” Sapp says.

With a partnership with the Bounavolanto family, Rainbow Cone’s truck can be found in Bouna Beef restaurant parking lots throughout the city and suburbs.

A post shared by Original Rainbow Cone (@theoriginalrainbowcone) on Jul 24, 2020 at 9:53am PDT

“We’re taking baby steps, but people keep showing up,” Sapp says. “Our menu is what works for a truck. The core is the rainbow cone, then cookies and cream or cookie dough. That’s it, because we can’t even move in there.”

Sapp says that families have joined the truck in parking lots across Chicago with chairs to relax and chat with neighbors in a socially distant setting.

“They’re coming in families,” Sapp says. “People who’ve never had (a Rainbow Cone) and people who have memories. All kinds of people are trying it out.”

You can “Follow the Rainbow” on the shop’s Instagram page for a schedule of where to find the truck in a neighborhood near you. The original ice cream shop, still at 91st and Western Ave. in Beverly, is open for carry-out and delivery through third-party apps.

“The product is the same,” Sapp says. “The way we’re serving it to you might be a little bit different.”

Fall Books for Kids to Celebrate the Season

Elizabeth Diffin -
Sign up your son or daughter for a unique class in Chicagoland.
Read more