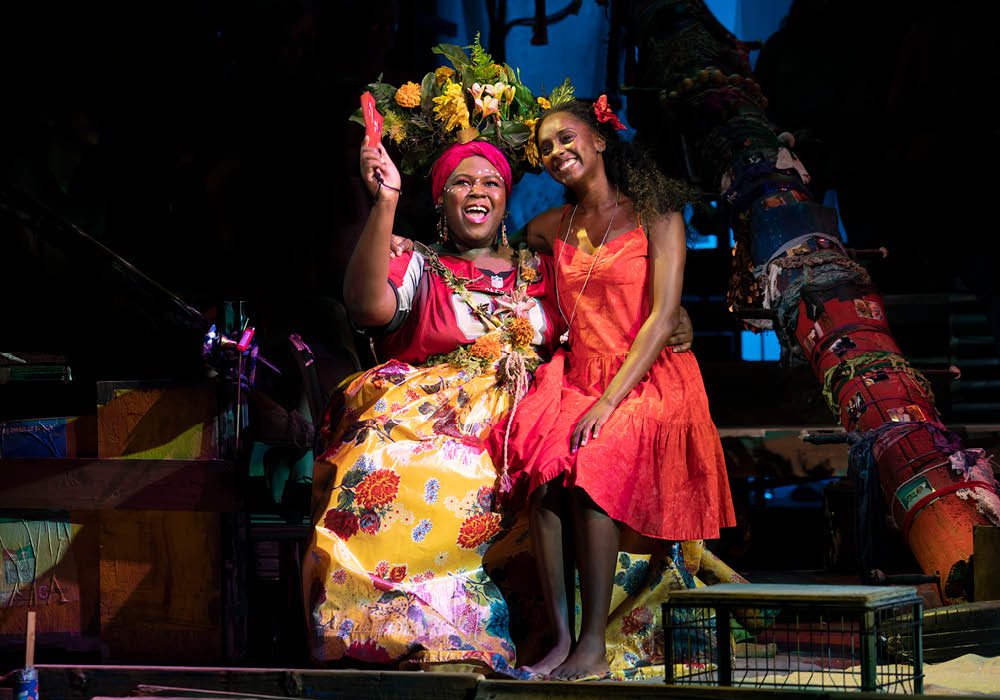 As soon as you step into the Cadillac Palace Theatre, you’re instantly drawn to the world of Once on This Island. There’s no need to wait for the show to begin. The actors are already playing the islanders as they interact with each other and even the lucky theatergoers sitting on stage as they set up the scene.

RELATED: Family-friendly performances not to miss this month

The Tony-award winning revival of the 1990 original Broadway production storms in with a powerful cast and interactive set to transport the audience to the Caribbean. It’s hard not to be enthralled of the timeless tale as the islanders sing the opening, “We Dance.” From there, you know that you’re about to step into an immersive theater experience as you explore the themes of love, social classes and dreams.

Adapted from Hans Christian Andersen’s popular fairytale The Little Mermaid, the story kicks off in modern time with a small child scared by a storm as the villagers try to comfort her by sharing the tale about Ti Moune (Courtnee Carter), a peasant girl who falls in love with Daniel (Tyler Hardwick), a wealthy boy from the other side of the island that looks down to people like her.

Ever since the orphan girl was saved by a terrible storm, Ti Moune is determined to follow her dreams since she believes the gods saved her for a special fate. How will these playful gods — Goddess of Love Erzulie (Cassondra James), God of Water Agwe (Jahmaul Bakare), Mother of the Earth Asaka (Kyle Ramar Freeman), and Demon of Death Papa Ge (Tamyra Gray) — lead Ti Moune on her journey and will the power of love help find her true destiny?

Once on The Island delivers a tragic, yet beautiful, story thanks to its wonderful cast. The quartet of actors playing the gods certainty stand out with their intricate costumes and powerhouse songs as they each bring a delightful and heart wrenching take on life for Ti Moune.

“Mama Will Provide” might as well be a show stealer as Kyle Ramar Freeman captivates the whole theater while working a skirt made out of a tablecloth (it might be my favorite costume detail from the show). Of course, Courtnee Carter shines as Ti Moune as you can feel the naivety mixed with dreams and love as she devotes herself to Daniel. She’s able to show the main character’s passion all through song, acting and dance, which brings different dimensions to Ti Moune even if she’s a young naive girl in love.

Plus, the choreography by Camille A. Brown is just so amazing to watch every time Ti Moune and the rest of the islanders fall into a joyous folk dance. Choreography is one of the reasons how “We Dance” sets up the story as even though this island is small, it’s filled with energetic and passionate people. You can’t help but smile as you watch the villagers dance as they bring a burst of electricity to the audience and you’re hooked to see more.

Another outstanding detail to the production is the set. The scenic design by Dane Laffrey doesn’t pull back to bring this island to life. While the tour production isn’t as close up as the original roundabout theater on Broadway, you can still see the cast interact with the set from playing with the piles of sand scattered on stage to splashing each other with water from the sea. These natural elements connect to the gods as they use their powers to guide Ti Moune through the good and the bad.

Since the tale of Ti Moune is told to a little girl, there’s no question that you can take your kids along to this magical Broadway production. We personally recommend Once on This Island for ages 10 and older since there is deeper material that might be harder for younger audience members to grasp. Please note that the show also features strobe lighting, haze and sound effects.

All in all, it’s an excellent option for tweens and teens who are obsessed with musicals. Once on This Island will open up a whole new discussion with your family on how so many different aspects of theater are needed to make a musical special from the set design to the book and choreography.

Also, the show is only 90 minutes with no intermission, so you can easily squeeze this musical into a school night. That’s always a win for us!

Once on This Island

Recommended for ages 10 and older