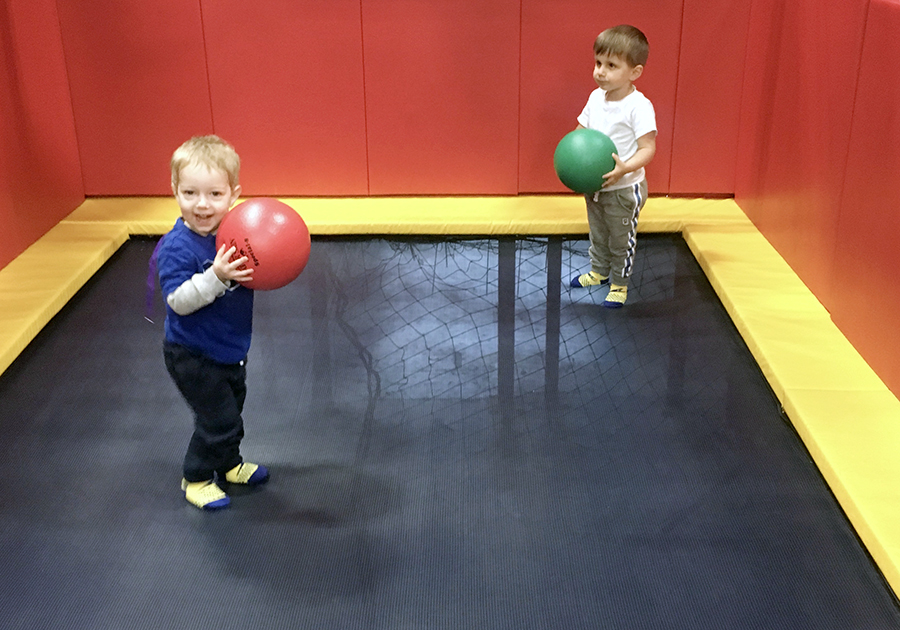 When my friend and fellow toddler mom Niki suggested that we take our tykes to bounce on the trampolines at Sky High Sports in Niles, I was, um … skeptical. You know that strange parent talent for imagining how a child’s injury would unfold in any type of setting? That kicked into high gear as I envisioned my son Isaiah, who turned two in February, happily bouncing himself into a hospital bed. The whole lifelong friendship and trust thing I have with Niki (We have been buddies since fourth grade!) won out though, and soon I found myself pulling up for a new adventure with Isaiah.

I find that during my son’s super active toddler stage, it’s ideal for both of us to get out of the house and do things as often as possible. If you are a toddler parent nodding your head right about now, then let me fill you in on our experience at Sky High along with a couple of other ideas to keep those munchkins engaged and out of mischief.

Our two-year-old boys bounced all over the trampolines and gleefully repeated the catch phrase of the day: “Boing boing!” Little ones have the place to themselves for the Mom and Tot Time held from 9 a.m. to 11 a.m., Monday through Thursday. The age range goes up to 6, which initially concerned me because I thought the older kiddos would trample my son, but he was fine and it was not overly crowded so there was enough space for everyone to get their bounce on safely.

The socks with grips that were provided for my son were great, and next time I plan to bring along a pair for myself as I did do some toddler spotting on the trampolines. The little guys enjoyed bouncing in the Kids Court, which has plenty of trampoline space, plus balls and a foam pit, where they did some building with the blocks as opposed to the swing and jump. The $10 admission price even includes coffee to keep parents fueled up for the festivities. Word to the wise, take care of the waiver in advance online, because it is easier than signing it there while juggling a squirmy toddler.

Where would I be without my mama tribe? Another friend recommended the Wiggleworms classes at Old Town School of Folk Music. The early childhood music program introduces wee ones to tunes. While the regular classes that explore rock, pop, and folk genres sound awesome, it is the ¡Hola! Wiggleworms class that really caught my attention. This one weaves Spanish language in with musical play. There is also Bonjour! Wiggleworms for all of the Francophile families out there.

When I think of tot activities, a science class is not the first thing that comes to mind. But toddlers are curious by nature so it could be a great time to introduce pint-sized learners to science! Cue the Toddler Discovery Science class at Kids Science Labs. The class is for 2- and 3-year-olds and shows tots how everything, from sports to dance, works. There are four locations throughout the Chicago area: Lincoln Park, Northbrook, South Loop and Naperville/Wheaton, so testing out a class near your neck of the woods could be an ideal way to get your tiny explorers interested in science.

All right, now grab your tots and go have some fun!