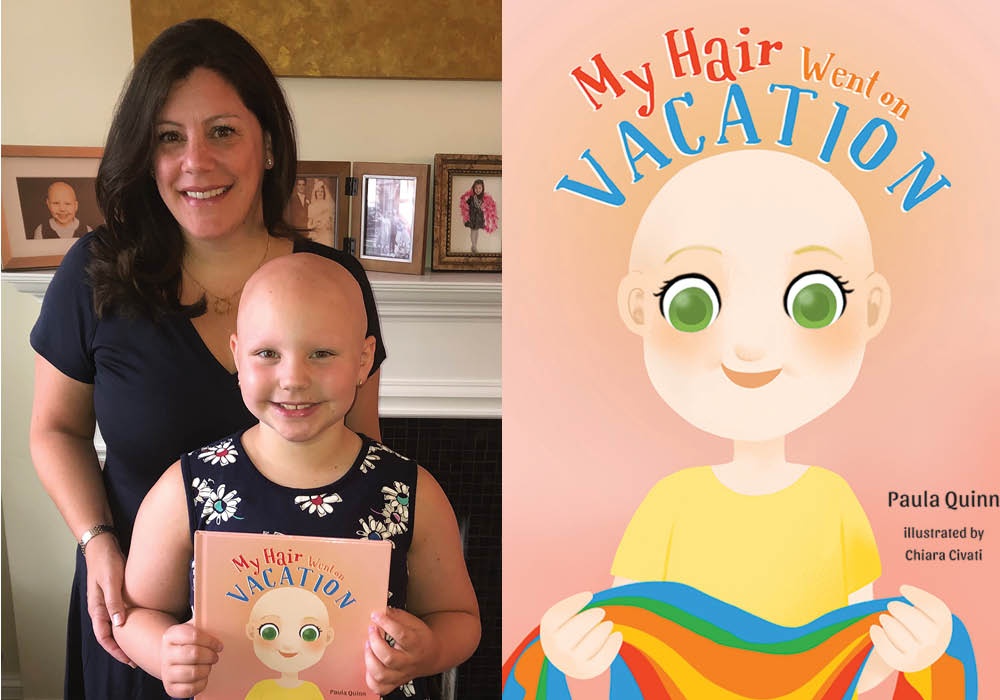 Rosie Quinn, 9, wears her baldness proudly, but it hasn’t always been easy for the Roscoe Village-area fourth grader, who was diagnosed with alopecia at two and a half years old. Alopecia areata is an autoimmune disease that attacks hair follicles, causing hair loss.

Growing up, kids were quick to point out that Rosie looked different from them – a topic that’s addressed in a new children’s book penned by Rosie and her mom, Paula.

My Hair Went on Vacation, published by Mascot Books and released during Alopecia Areata Awareness Month, is a rhyming picture book that tells Rosie’s story and reminds young readers that their differences are what make them special.

“We hope that after reading this book, children will embrace their own self-worth and uniqueness,” says Paula. “The book will naturally lead to a thoughtful discussion between parents and children about differences, and will aid in bullying prevention.”

When Rosie’s hair began falling out as a toddler, she would often joke with her peers that her hair simply “went on vacation.” Instead of getting points and stares from other children, Rosie found that kids embraced the silly story.

“I would tell kids all about the adventures of my hair,” says Rosie, an outgoing child that says what hair she lacks on her head, she makes up in personality. “I wanted them to laugh with me instead of at me.”

My Hair Went On Vacation chronicles some of the imaginary stories Rosie used to make up – that her hair has explored the world with a tiny suitcase while she was in Chicago waiting for it to come back and tell her about the fun it had. The vibrant and detailed illustrations from Italy-based Illustrator Chiara Civati bring the story to life in a way that kids can understand and easily relate to.

Rosie’s acceptance and positive attitude about Alopecia began when her parents turned a painting she made into a one-of-a-kind headscarf. When Rosie looked in the mirror for the first time, she couldn’t stop smiling.

That’s when their charity, Coming Up Rosies was born. Coming Up Rosies brings those same smiles to children who have experienced hair loss by selling pre-printed head scarves (and now, masks) made from Rosie’s paintings as well as smile kits (canvas, markers and paint) that let kids create their own head scarves or superhero capes.

In addition to chronicling Rosie’s journey of self-acceptance, My Hair Went On Vacation shines light on Coming Up Rosies, and Rosie’s mission to make sure that bald kids everywhere are always smiling.

“There is so much more to a person than what they look like,” says Rosie. “I’m proof of that. I’m bald, but I’m also smart, kind and beautiful. My bald head is one part of me; it doesn’t define me. I hope this book helps kids see that being different also means being special.”

What Is a Midwife? You Might Be Surprised by All They Do

Brought to you by University of Chicago Medicine
Read more
Guides