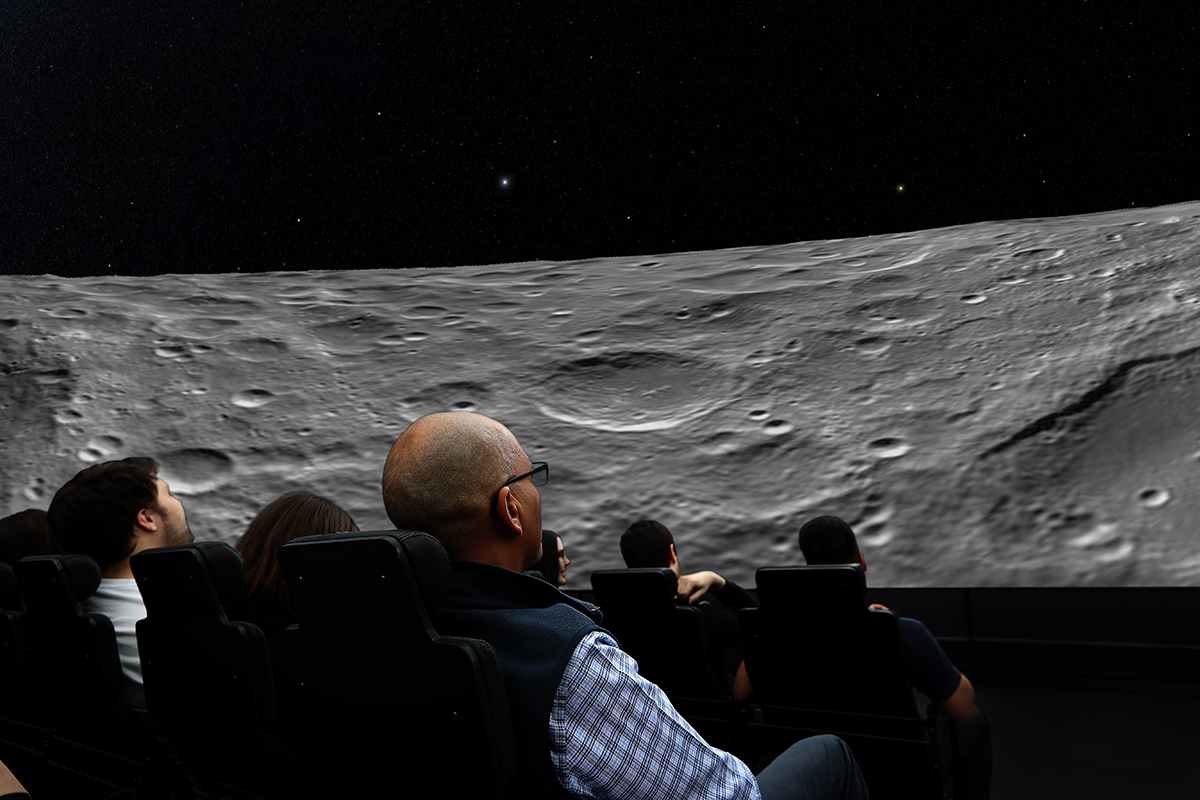 Neil Armstrong set man’s first foot on the moon on July 20, 1969 and his small step will be celebrated throughout the Chicago area with events, scientific discussions and even moon yoga.

With a newly-discovered trove of never-before-seen 70mm footage and audio recordings, “Apollo 11: First Steps Edition” joins Neil Armstrong, Buzz Aldrin and Michael Collins, the Mission Control team and millions of spectators around the world, during those momentous days and hours in 1969 when humankind took a giant leap into the future.

Why Go To The Moon?

A conversation with space historian Roger Launius and historian of colonialism Margaret Huettl on the past and future of lunar exploration.

Channel your inner explorer and help us imagine the next “Moonshot.” Discover how the spirit of Apollo 11 can inspire and challenge us to achieve the impossible. Moon Bash includes hands-on programs, special talks and performances, one-day-only theater shows, and fun for the whole family.

Fly Me to the Moon Yoga

Expect Moon salutations, half-Moon poses, crescent Moon shapes and an opportunity to contemplate the role of the Moon in our history and future under the dome in the Grainger Sky Theater. Recommended for ages 10 and older.

To The Moon & Beyond: A Conversation

A special moderated conversation on why the Moon still matters with Captain James A. Lovell, Jr., Apollo 8 and Apollo 13 astronaut, and Beth Moses, Chief Astronaut Instructor and commercial astronaut with Virgin Galactic.

Play some games, make some crafts and have a blast (off!) in celebration of the 50th anniversary of the moon landing.

Celebrate the 50th anniversary of the Lunar Landing. Tally the technology brought by the space age, launch a rocket, and a make a scale model to eat. Create a crater, find out about phases, and join us for a Discovery Center version of “race to the moon.”

Hosted by Arlington Heights Public Library, bring a telescope or use one on site to see the wonders of the universe. For first time astronomers and seasoned pros, we will be out looking at what the galaxy has to offer and learning along the way. Event is weather permitting.

Historian Jim Gibbons will discuss the space goal proposed by President John F. Kennedy in 1961 and how it was fulfilled for the U.S. in 1969. Gibbons will explain how Armstrong became the first man to walk on the moon with Aldrin following behind 20 minutes later. He will discuss how both men spent almost a full day on the surface of the moon, bringing back many lunar items with them, and how this launched an important part of American history.

Celebrate the 50th anniversary of the Apollo moon landing.  We will learn about the moon, the various craft and crew who visited there, and future moon explorations. Recommended for ages 2-8.

Celebrate the 50th anniversary of the moon landing with games, storytimes, crafts, clips of the landing and a talk with a NASA ambassador.

Enjoy Space-themed activities and games to celebrate the 50th Anniversary of the Moon landing on July 20th, 1969.

Celebrate the 50th anniversary of the moon landing with a “moontastic” family story time.  Registration is required.

Celebrate the 50th anniversary of the Apollo 11 moon landing with a viewing of artifacts from NASA including an astronaut’s helmet, an astronaut’s meal and more. View the night sky through a telescope and enjoy snacks, crafts, games and fun surprises.

Learn about NASA’s Apollo Project which culminated in the 1969 moon landing at College of DuPage’s Apollo 11 50th Anniversary Celebration. Attendees will have the opportunity to explore interactive booths covering a range of Apollo program-related topics, including virtual reality exhibits from the COD Astronomy Club and the Glen Ellyn Library, model rockets from the Northern Illinois Rocketry Society, a real moon rock, a lunar activity table from SciTech Museum, stomp rockets and space demos from American Science and Surplus, and telescopic sky viewing with the Naperville Astronomy Association. In addition, David Chudwin M.D., author of “I was a Teenage Space Reporter: From Apollo 11 to Our Future in Space,” will be on hand to meet attendees and sign copies of his book.

The Naper Night concert series will celebrate the Moon Landing with a line-up featuring Spaceface, a David Bowie tribute, opening for Think Floyd USA, a Pink Floyd tribute, which will play the chart-topping album “Dark Side of the Moon” in its entirety.

Celebrating the 50th anniversary of the 1969 Apollo Moon Landing, kids and caregivers can play games, make a rocket ship, and picnic on the grounds weather permitting. Craft available while supplies last. Drop-in program appropriate for elementary age children accompanied by an adult, no registration required.