In the middle of the city, a bit of coal county 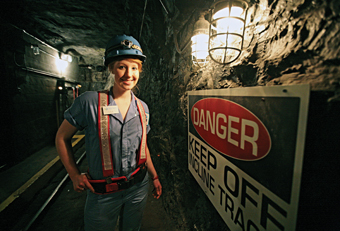 Even though she lives in the city, Lila Newman spends her days in the dark abyss of a coal mine as a tour guide for the Museum of Science and Industry.

The aspiring actress, who does improv at several theaters in Chicago, didn’t know anything about coal mining when she first started working at MSI, but now she considers herself something of an expert on the country’s coal mining history.

Plus, every tour puts her in front of a new audience and one more chance for a laugh from people who haven’t heard her corny jokes before.

Q:How did you end up working the coal mines?

A: It’s a very popular job with actors. One of my friends works at the U-505 boat and I was looking for a job to be on my feet and with people. … I’m really excited about the job and the dynamics of working with adults and children of different backgrounds. It’s a chance to explore how to engage different people. I’ll tell a joke for the kids and one will be an in-joke for the parents. I feel like I’m a Pixar film because I have to cater to both audiences.

Q:It’s awfully dark down there. Ever have anyone suddenly realize they’re claustrophobic and freak out?

A: If people get down there (and get freaked out), we walk them out immediately. We’re responsive to the fact that it is dark and there are loud noises. I’ll generally alert people with young kids not to stand too close to machines when I’m going to turn them on. … (The coal mine) is good for all ages, but not good for all people.

A: We give a good amount of tours in the day, usually seven or eight. It’s 25 people in each group and if you get a loud group that you have to talk over, that’s a lot of work. I’ve learned to lower my voice to make people come closer when they start shouting. I have to preserve my voice because who knows what audition or show I have after.

Q:What’s the best part of your job?

A: I’m much more engaged with the city and when I walk around on the street, I can’t turn the museum mode off. I make eye contact, I greet people. … When I see a kid, 4 or 5 years old, I wave at them now. … When I’m on the Blue Line, sometimes people think that’s weird though.

Here's how to celebrate Rosh Hashanah and Yom Kippur with your kids.
Read more