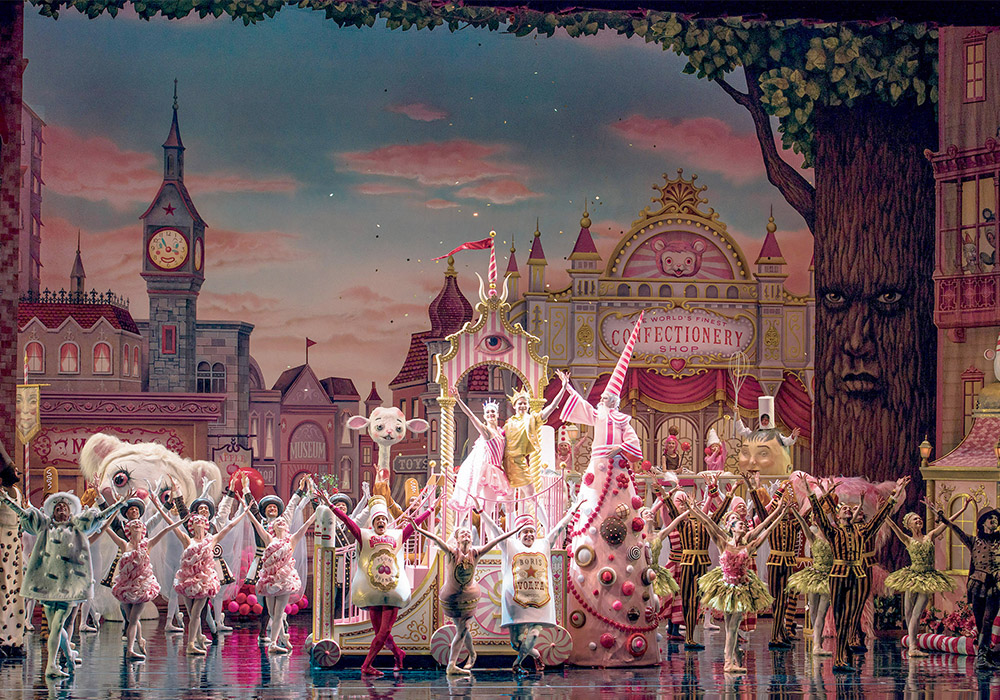 Think ballet is strictly for the fully grown, always-serious set? Have we got a tasty treat for you! The Chicago premiere of Alexei Ratmansky’s “Whipped Cream” is a downright feast for the eyes, from pop-surrealist artist Mark Ryden’s stunning sets to the athletic prowess of the famed American Ballet Theatre’s dancers. (The ears get in on the fun, too, with Richard Strauss’ 1924 score performed live by the Chicago Philharmonic.) The cherry on top? Characters straight out of a decadent—and slightly crazy—dessert menu. I spoke with Katherine Williams, soloist and longtime dancer with ABT (she moved to New York City to train with ABT’s Jacqueline Kennedy Onassis School at 16 and joined the main company as an apprentice in 2007), about what makes this production so much fun, and why Whipped Cream truly hits the spot for families.

“I like to call it our ‘Disney ballet’ because it’s based on a fairy tale … where a young boy gets sick from eating too much candy—or whipped cream—and he’s brought into this fantasy land of his dreams,” Williams told me. “There are definite dark sides to those dreams, but he basically gets caught up in this whole story [and with] all of these characters that meet him in Dreamland. It’s a total spectacle.” She was particularly enamored of designer Ryden’s sets, too. “It’s just so intricate and spectacular—you could spend all of your time finding new nuances within the set.”

Fanciful characters include gingerbread and marzipan soldiers, Princess Praline—who loves Prince Coffee, of course—a whisk-wielding Chef, evil nurses (“They come out with life-sized needles—it’s one of the most fun things I’ve done onstage, it’s an audience highlight, I’d say, and very, very funny”), Princess Tea Flower and her court, in which Williams plays a Tea Flower Attendant (“We’re wearing these beautiful green tutus that look like leaves and we’re part of that dreamland sequence, so you’re never quite sure if it’s real or not!”), and even an entire section called The Liquors. It’s among the latter crew where Katherine is debuting a new character on tour, a bubbly, dizzy bottle named Champagne.

“She has two men vying for her attention; one is brandy, and one is vodka, and they’re sort of the heroes of the story because they save the little boy … [Champagne is] always trying to find her balance because she’s all over the place- she never quite knows where she is, and can never keep herself right side up.”

Also among the cast of characters are the Whipped Cream Ladies, whom Williams calls the heart of the ballet. “They come out in the first act and continue on … it’s very impressive to see everybody moving together in a strange, fluid way, giving the impression of whipped cream.”

And lest audiences believe that ballet dancing is a cushy job, Katherine tipped me off to one of the hardest roles in this entire ballet: That of the supers. “Like extras in a movie, we [have] supers— and there’s a super called the Gumball Girl. She wears a ginormous red dress, you should look for her, and a giant headpiece that is so painful. She stands there during the entire act wearing this and it’s very heavy! Many of our company members have had to go through this process and have happily come through the other side.”

On that note, Williams added a bit of advice for young dancers. “It’s kind of cliched, but work really hard and never give up—I would say that’s a common trait at ABT! I think you have to be able to deal with failure and keep your head up and keep going no matter what.”

Ready for a delicious upgrade? Before the 2 p.m. weekend matinee performances on Saturday, April 13 and Sunday, April 14 two tea parties will be hosted at the theater, inspired by Princess Tea Flower and featuring a selection of teas and goodies. (The parties are available to add once tickets are added to the cart.) How sweet!

Since the pandemic, even more children are struggling with reading. What to look out for and how to help, with advice from Redwood Literacy.
Read more
School Issues