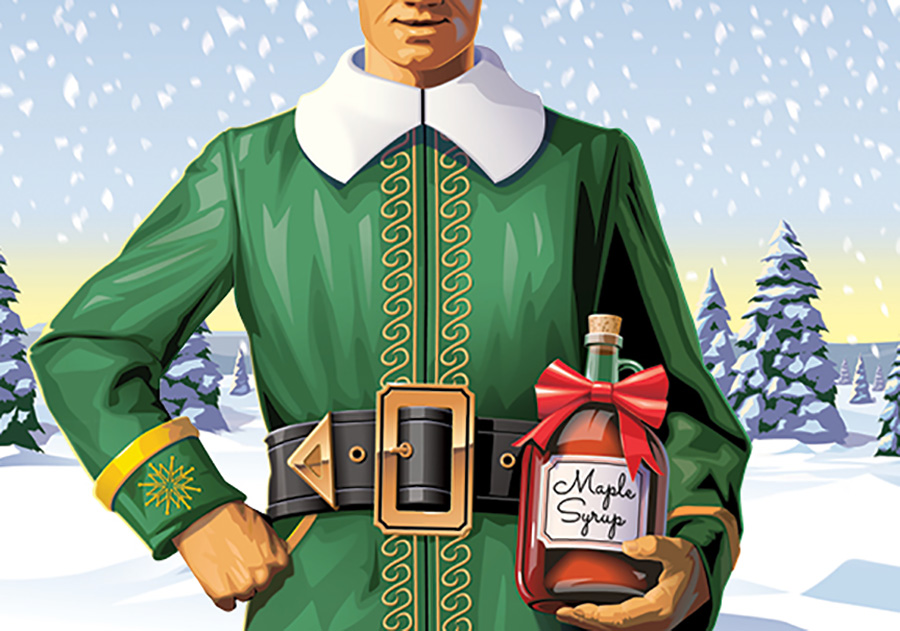 Everyone has that movie: the one that you have to watch each holiday season. For me, that movie is Elf. The new holiday classic came out when I was in college (yes, I am old), and I’ve made a point to watch it every year since. There’s just something about the sweet silliness of a man raised as an elf at the North Pole who helps his birth family discover the joy of Christmas that gets me into the spirit of the season. And I’m happy to report that the Paramount Theatre’s staging of the musical version of the movie is just as delightful – if not more so.

Elf the Musical continues the Aurora theater’s tradition of putting on a grand show just in time for the holiday season. But with Santa Claus on hand – and narrating the whole affair – it’s definitely the most overtly seasonal offering in their repertoire so far.

While the basic plot of Elf the Musical follows the movie’s, it’s given a little razzle-dazzle – or should I say sparklejollytwinklejingley? – in the form of its music. As a musical theater diehard, I obviously enjoyed the full company song-and-dance numbers like “Christmastown,” “The Story of Buddy” and “Sparklejollytwinklejingley,” but I was equally charmed by smaller moments like the duet between his stepmother and little brother (Lara Filip and Oliver Boomer, displaying an impressive voice, especially for his age), “I’ll Believe in You,” and would-be girlfriend, Jovie’s (Samantha Pauly), lovely lament about falling in love with an earnest manchild who still believes in Santa.

As Buddy, Kyle Adams has some large elf shoes to fill (Will Ferrell originated the role), but he brings his own joyous flavor to a part that could be overly saccharine or cringingly awkward. His obviously trained voice also lets Buddy’s impromptu musical interludes shine – after all, we all know “the best way to spread Christmas cheer is singing loud for all to hear.”

The musical does stray from the movie in a few ways, mainly how it skews a bit more adult than the PG-rated film. We noted a handful of expletives throughout the show, as well as some innuendos that are likely to go over kids’ heads – but may result in some unwanted questions from more observant theater-goers. There are also a few meta jokes throughout that may require a bit of explanation for your younger seatmates, but are worth it for the theater-wide laughs that result.

Although the star of Elf the Musical is indisputably Buddy, the elf in question, another jolly guy can’t help but steal the show. Roger Mueller plays Santa with a dry humor rather than over-the-top gusto and manic ho-ho-hos (and this Santa is a Bears fan, poor guy). But he’s also responsible for the most magical moment I’ve ever seen in a theater – no spoilers, but I was grinning like a 5-year-old on Christmas morning.

That, in a word, is the appeal of this show: magic. Because all the singing and dancing and red and green sparkles in the world would add up to nothing without that hard-to-describe feeling of watching a family rediscover the joy of Christmas (with an overgrown elf’s help). And sometime this holiday season, between all the shopping and gift wrapping and baking, I promise that you’re going to want to join them.