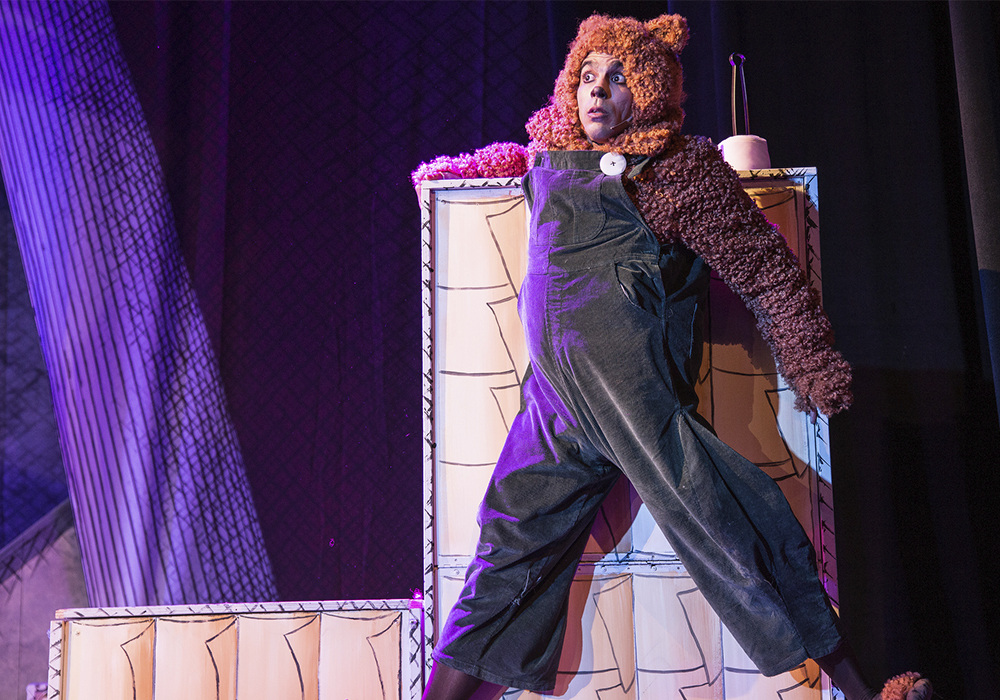 Based on the attending audience at the North Side’s Athenaeum Theatre, it was hard to say who was more excited to be at the Chicago premiere of “Corduroy”—the tiniest theatergoers or their nostalgic parents.

Emerald City Theatre Artistic Associate Jamal Howard directed this snuggly adaptation of Don Freeman’s childhood classics “Corduroy” and “A Pocket for Corduroy,” and the famous button-missing Corduroy has never looked more appealing. Everyone and their babysitter knows the tale: A bear in overalls who lives in a department store, a little girl named Lisa who promises to bring him home as soon as possible, and a madcap middle-of-the-night search for a button that doesn’t go quite as planned. Howard and team deftly transition “Corduroy” to the stage with the help of sweet sets (designed by Jeffrey D. Kmiec), some very special additions to the script (including a few quick lessons in American sign language!), and a cast who goes above and beyond (and sometimes over and through).

Most notably, Corduroy was brought to life by the exceptionally entertaining physical theatre and circus arts performer Jean Claudio, who deserves a gold star in place of that button for his cuddly (yet never cloying) portrayal. The character of Lisa (Tia Pinson) received a welcomed boost in dialogue from the story; whereas her narrative originally began and ended with the hope to buy Corduroy, we now get to enjoy the “behind the scenes” of Lisa and her mother (a pitch-perfect Michelle Renee Thompson) at home, and Lisa’s misguided attempts to earn a little extra pocket change. Other fun updates to the tale are the expanded presence of the Night Watchman (Matt Miles) and his plans to thwart a suspected department store intruder—with plenty of clowning and mishaps—and the hardworking clown duo of Averis I. Anderson and Kelsey Shipley as they help/hinder the other characters’ journeys in sweet, silly ways.

Highly physical and wonderfully true to Freeman’s beloved pages, this gentle tale clocks in at an hour, making it perfect for literary lovers of all ages. In a world where childhood and its accompanying boundless imagination is all-too-fleeting, “Corduroy” extends an invitation to dwell in make-believe for as long as possible and also offers up the important lesson that every single person has value—regardless of their appearance. (Get ready to kiss your babies and rock ‘em a little bit longer tonight, parents. Consider this your friendly warning.)