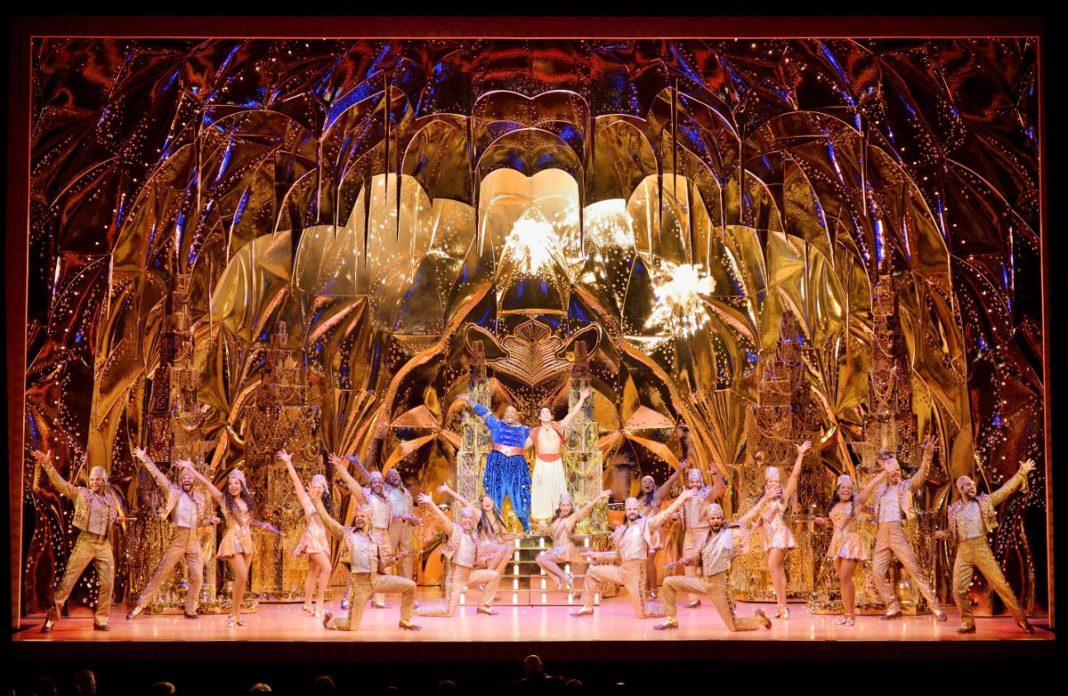 I am, for better or worse, a child of the ‘90s. That means that I, like many of you, spent my formative years wearing slap bracelets and jelly shoes, listening to Mariah Carey, and watching and re-watching the movies that came out during the “Golden Age” of Disney. And as a bona fide child of the ‘90s, that makes me uniquely suited to size up the stage versions of those same films; you know, The Little Mermaid, Beauty& The Beast, The Lion King and, as of this week, Aladdin.

Disney’s Aladdin, showing at the Cadillac Palace Theatre through the summer, is a breathtaking spectacle unto itself. The excited audience whooped and cheered throughout the gloriously staged musical, which is sure to entertain kids and parents alike. The music includes the beloved tunes from the movie, as well as some written just for the musical, but since Alan Menken, who composed the movie score, wrote all the music, it all hangs together well. And everything from the costumes to the sets explode with color, warmth and glitz, transporting you straight to the ancient tales compiled in One Thousand and One Nights.

Since the musical bears his name, we have to start with Aladdin, perfectly embodied by Adam Jacobs, who originated the role on Broadway. The “street rat”-turned-royal suitor gets a bit of backstory (did you ever wonder what happened to Aladdin’s parents?), but without losing any of the rapscallion charm that makes you fall in love. He’s helped by a gorgeous singing voice and a trio of friends – replacing monkey pal Apu – who perform some songs that help flesh out his character and provide comic relief.

But name aside, the real star of this show is Genie, played by Anthony Murphy, who gives a tour de force performance as the blue guy everyone knows and loves. Murphy never tries to imitate Robin Williams’ manic energy from the movie, but hams – and camps – it up in his own unique style. The actor’s over-the-top performance is a self-referential delight. And anyone who can riff on Dancing with the Stars, Oprah Winfrey and the Cubs is a hit in my book.

The Genie’s set piece, “Friend Like Me,” is the highlight of the show, a song-and-dance extravaganza that honestly had me wondering “How did they do that?” The song’s impact was evident when it immediately received a standing ovation, a first for this veteran theater-goer. Other musical stunners include the beautifully exotic “Arabian Nights,” bromance anthem “Babkak, Omar, Aladdin, Kassim,” triumphant “Prince Ali” and, of course, “A Whole New World,” a magical piece of stagecraft that literally had the audience sighing in bliss (guilty as charged).

Other standout characters – and performances – include Isabelle McCalla as Jasmine, who goes against the “Disney princess” trope to reveal a headstrong woman who made my feminist heart sing, Jonathan Weir as the villainous Jafar, a less-scary version of the movie’s baddie who displays some arch wit, and Reggie de Leon as his sycophantic, yet hilarious, assistant, Iago, who trades in the feathers but retains some of the character’s more avian traits.

We live in the real world, not a fantastical show, so we don’t have magic lamps or flamboyant genies to obtain our hearts’ desire. Good thing, then, that before the show even opened, Broadway in Chicago announced an extension of its run through the summer. Because even without a magic genie, your wish to see Disney’s Aladdin really can come true.