A calendar’s worth of friendship with dynamic ‘Frog and Toad’ 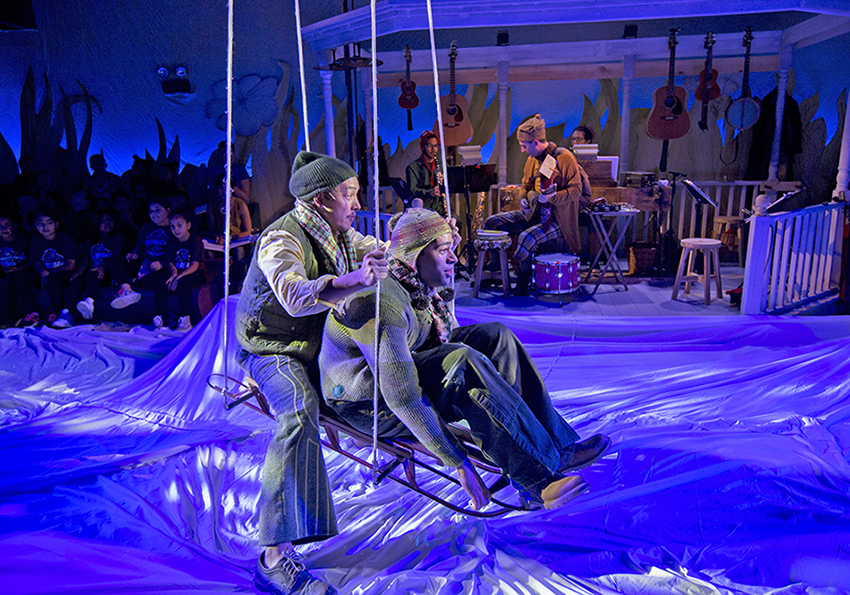 No matter the season, you’ve got a true blue (or rather greenish) friend. That’s the message in the exceptionally enjoyable ‘A Year with Frog and Toad,’ directed by Stuart Carden and now playing at Chicago Children’s Theatre’s The Station.

Fans of both Arnold Lobel’s sweeter-than-sweet Frog & Toad books as well as Chicago Children’s Theatre’s beautiful brand of family-friendly stagings will absolutely love this new take on the Tony-nominated show, which also happened to launch the company back in 2006. (‘Frog and Toad’ had a particularly marvelous remount in 2013 in CCT’s previous digs as well.)

A timeless show requires timeless tunes, and music director Andrea Velis Simon more than delivers. The jazzy, vaudevillian grooves are a perfect counterpart for this classic tale, and the upbeat instrumentals are practically characters, too.

‘Frog and Toad’s’ cast members are all ridiculously talented musicians as well as savvy actors, all too aware of their audience’s intelligence. (You think the smallest set doesn’t know when they’re being talked down to? Think again.) Shawn Pfautsch as Snail, reprising his role from the 2013 production, has one of the best comic turns in the whole shebang (one which will keep the youngest audience members giggling the entire trip home). Jazelle Morriss and Lauren Vogel are every bit as charming as you’d expect a host of forest creatures to be, but it’s Morriss’ pitch perfect take as Young Frog (in a not-too spooky flashback) and Vogel’s turn (and range) as Mother Frog that’ll make you sit up and take notice — and make other actors wonder if the bar for children’s performers has now been set unfairly high.

And as for Frog and Toad themselves (Matthew Yee and Andy Nagraj, respectively), this duo works incredibly well together, with Yee’s patient, upbeat Frog a perfect counterpart to Nagraj-as-Toad’s tendency to be a worrywart (yes, pun intended). Their gentle, cozy friendship inspires a slower pace and a respect for each season’s passing, and serves as an important reminder that best friends are the very best part of life.

Access Weekend (for children on the autism spectrum, with Down Syndrome, who are blind or have low vision, and who are deaf or hard of hearing) is on Oct. 7-8, 2017