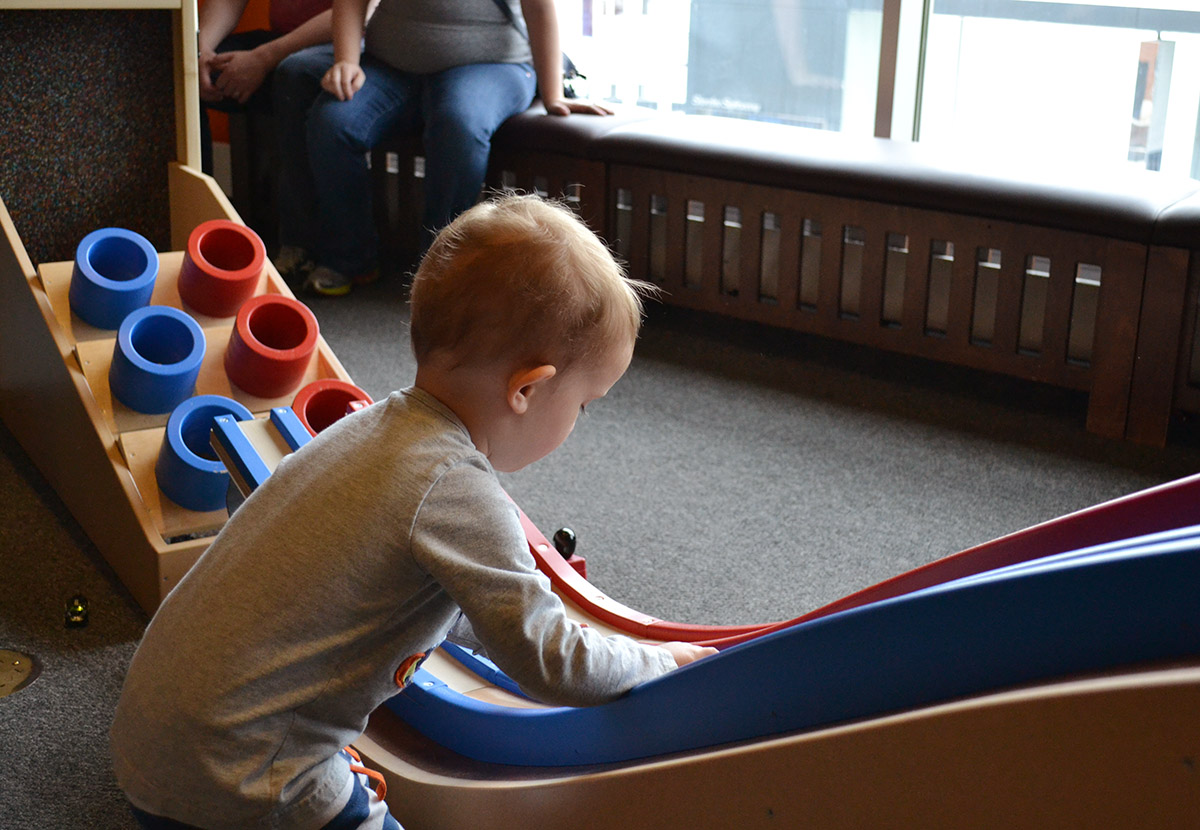 It started as a small pop-up exhibit of 6-7 tracks, then it grew, and grew and grew some more, until the entire room zoomed. No, this isn’t a Dr. Seuss story, but the newly-opened Zoom Room at the Chicago Children’s Museum creates smiles just as big as the silly stories do.

It ignites imaginations, smiles, experimentation, STEM, nostalgia and good old fashioned fun, but at its core, Zoom Room is a simple concept: toy cars of all colors, shapes and sizes, going down ramps. However, these are no ordinary ramps. There are a total of 41 crash ramps, jump ramps, 12-foot pulleys, elevator launches and textured ramps, making sure the more than 400 cars in circulation at any one time are really put to the test.

Each ramp has something new and different to offer. Some are adjustable allowing kids to play with timing and velocity and others have varying textures to experiment with acceleration.

Additionally, many ramps are experienced best with multiple people, creating a social-emotional connection for kids to create experiments and have fun at the same time.

“They will look at it, they will hypothesize, analyze, make changes, test it, and do it over and over again,” Twania Brewster, VP of Marketing at Chicago Children’s Museum, said, as we watched three cars from three different children race down one of the ramp setups.

And while kids think they are getting to play with the ultimate toy car and ramp setup imaginable, they’re actually experimenting and learning in an engrossing STEM environment. Don’t worry though, they don’t have to know they’re learning while they have the times of their lives.

“Kids can actually see physical science in action,” Brewster said. “I like to call it our physics laboratory for kids.”

This exhibit is completely unique to the museum. The design and experience teams spared no effort or thought; many of the ramps can be scaled for more challenging tasks, while others are specifically designed to appeal to older kids. Even the cubbies under the benches serve the purpose of allowing kids to sort the cars, an important developmental skill for the younger crowds.

And arguably one of the best aspects of Zoom Room is its broad appeal. Toddlers through adults were having the same reactions and the same amount of joyful fun. It is literally impossible to spend more than three seconds in the Zoom Room without hearing some rendition of, “Oooh!” or, “Ahhh!” or “Wow!” Brewster admits that she often comes to the room before it opens in the morning to have some fun with the cars herself.

“There’s a nostalgic portion to all of this,” she said. “We all remember playing with cars as kids and having our own little tracks. It brings parents and adults to a place where they just have tons of fun.”

Walking around the Zoom Room there isn’t a screen in sight and, even better, nobody even seems to miss them. Kids and adults are engaging with each other and others around them in pure bliss, while maybe even learning something to boot. If that isn’t a win-win scenario I don’t know what is.

Be sure to check out Zoom Room before it zooms off!

There's no better time to visit local museum, park or other attraction than on kids' day!
Read more
At Home

Plan your family's fun at these attractions, playgrounds, theatres and venues for children with special needs.
Read more
Health

The Centers for Disease Control and Prevention has listed their 2022 vaccine guidelines.
Read more