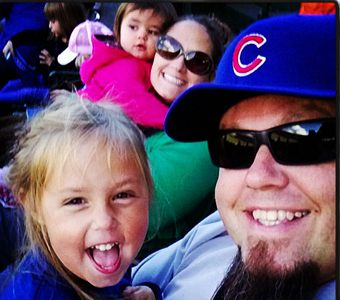 To say that baseball was a big part of my life growing up would be understating reality. Tee-Ball and Little League in South Suburban Park Forest, followed by Pony League in Crete, and later Colt League in Davenport, Iowa – I played a ton of ball before hanging up the cleats after my junior year of high school.

It was in those early days, though – during Tee-Ball and Little League – that my interest in Chicago’s professional teams really took hold.

Being from the far south suburbs, the White Sox were generally my team of choice. My Little League team was named the “White Sox” and we even had replica uniforms based on the 1983 look – which the Sox actually brought back for select games this year.

While the White Sox had become my default team by design, I eventually grew to appreciate their North Side rivals as well, often citing to friends that the Sox and the Cubs were in two entirely different leagues, thus making it perfectly acceptable to like both.

Over the years, I attended numerous games at Old Comiskey Park and the place now known as “U.S. Cellular Field”(which is still New Comiskey Park as far as I’m concerned), but in 36 years of life, I had never stepped foot inside Wrigley Field, despite living in the northern suburbs since 1998.

The Cubs played the Atlanta Braves and I took my girls to their first baseball game.

Over the past month, Major League Baseball has been working with Dove Men+Care to showcase a number of professional baseball players in their most-important off-field position: Being a Dad.

Dove Men+Care and the MLB brought together seven of Chicago’s ‘Big League Dads’ – an all-star lineup of dad bloggers that are known for sharing their stories of fatherhood with the world. Along with our families, we enjoyed an afternoon of baseball at Wrigley Field. Among those in attendance were Bobblehead Dad, Diary Dad, Dad on the Run, FanDads, Daddy’s Grounded, Robert Duffer of The Good Men Project’s Dads & Families, and yours truly representing The Rock Father and Chicago Parent. 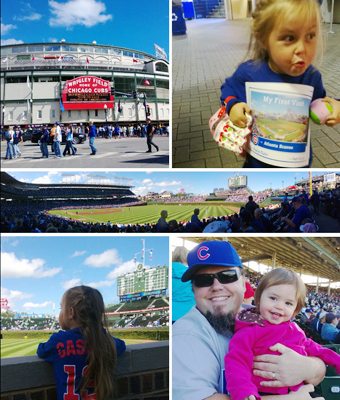 There were a lot of smiles in the “Friendly Confines,” and we marked our big first game by getting the girls hooked-up with complimentary “First Timer’s Certificates” as keepsakes. Friends were made . . . dances were done . . . and after the game the whole family got to take part in a special “Run the Bases” event. My oldest, with no coaching whatsoever, even decided to attempt a slide into home plate.

The Cubs ended up losing to the Braves with a score of 5-2, but that wasn’t important. I got to spend a beautiful fall afternoon in Chicago with my girls and that’s a big win.

Where to See Santa in Chicagoland