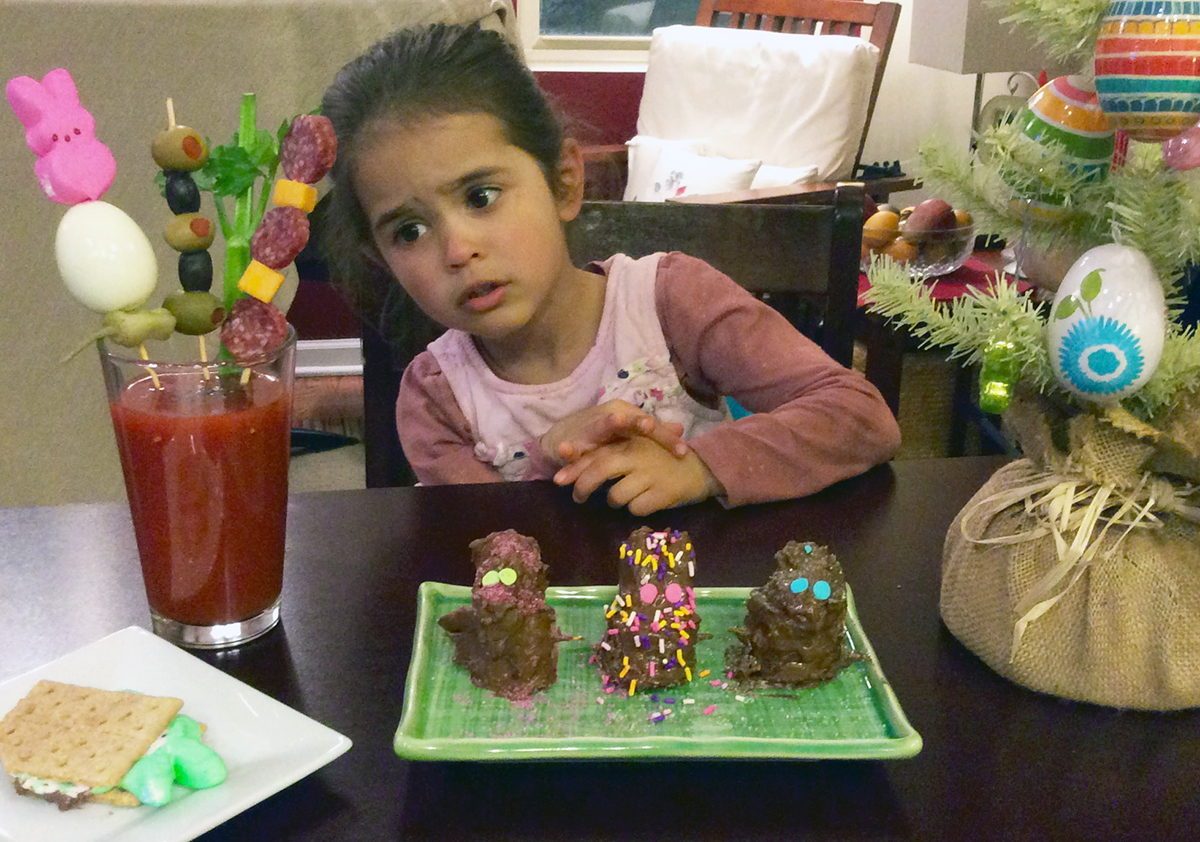 This week’s blog post is by The Paternity Test co-host Matt Boresi, who lives in the Edgewater Glen neighborhood of Chicago with his wife (“Professor Foster”) and their 4-year-old daughter Viva, who is sitting atop a hoard of Easter candy like a sugar-stoked dragon.

If you’re a family that celebrates Easter, then you’re spending this week trying to figure out what to do with the bushels of confections dumped upon your house by the world’s least health-conscious pagan rabbit god. By 7 a.m., you’re watching your kid blur past you with their teeth already brown from chocolate. Do you let them eat all this stuff? Do you hide it and parcel it out until Halloween? Do you donate it to the troops and run the risk of them jamming their trigger guards with melted Reese’s egg?

Of all the surplus candy giving you fits, the most troublesome is likely Just Born, Inc.’s “Peeps,” the brightly colored marshmallow chicks (and bunnies*) that are currently covering your dining room table and quickly going stale. Peeps are festive,** Peeps are adorable and Peeps are … gross.

So what to do with the damned things? I am going to tell you!*** Be warned, though, depending on your family’s tastes, the recipes–like marshmallow chicks themselves–might not fly.

Dear Readers, I realize that many of your are ethically enlightened, erudite, progressive parents. As such, before you feed your children, you probably vet your recipes to ensure they are culturally sensitive and do not impart emotional violence upon the diner. No doubt you’ve seen the flap at Oberlin College, in which poorly conceived Banh Mi and hoary sushi was declared anthropologically offensive by Millennial undergrads. I am hesitant, then, to introduce this first recipe: Rumaki.

“Rumaki,” you say? What is that, even? Japanese? Cantonese? Polynesian? The answer is, of course, none of the above. The original recipe (bacon wrapped chicken liver and water chestnut) was invented at Don the Beachcomber’s restaurant in Palm Springs at the advent of “Tiki culture,” (Don and Betty Draper love the stuff) and the name was conjured from thin air to sound unspecifically Pacific.

So, is wrapping things in bacon a “mid-century modern” swingin’ treat? The gastronomic version of wearing a snap brim fedora and punching Dominic Dunne right in the mouth? Or is it the culinary equivalent of Henry Silva’s performance as “Chunjin” in “The Manchurian Candidate”… comestible yellow-face? I leave this to your personal discretion.

What I have done is wrap peeps in cooked bacon, pinned it with a toothpick, dipped it in chocolate (preferably dark) melted in a double boiler (you can use leftover eggs, bunnies or kisses!) and then sprinkled them with pastel candies and dotted with candy eyes.

Viva wouldn’t touch them, but they’re a great snack for dads or for bacon-obsessed hipsters. Be warned, though, you might get picketed harder than a production of The Mikado at NYU.

Most listicles will recommend you make Peeps into Rice Krispy treats. I consider that the coward’s way out. The Peeps are entirely melted and you don’t have to face the fact that you murdered a little critter that used to have a face. It’s like eating a McNugget without coming to grips with the chicken’s life as a beakless, crowded commodity. I prefer to turn the Peeps into S’mores, so after heating, their heads drip out of the side of the graham cracker, evoking that off-stage murder in Arthur Miller’s “The Crucible” of lovable, innocent (and historical) Giles Corey. Giles is “pressed” (Aye, pressed), a board is placed on his chest and rocks are piled on top until he is dead. Turns out he wasn’t a warlock and he never gave up any names to the HUAC. I mean, the Salem Witch Trials. Honor Corey’s bravery with Peep S’mores.

Viva ate this one, but had a far off look in her eyes the whole time.

Nothing says “I’m drinking hard liquor before noon with impunity” like a Bloody Mary. Nothing says, “I’m having a cocktail and eating 3,000 calories of food” like a modern Bloody Mary with preposterous savory garnish. Nothing is more whimsical than adding a Peep to the whole travesty.

I made a traditional Bloody: vodka, tomato juice, lemon juice, Worcestershire and Tabasco. And garnished it with salami, cheese, olives, more olives, celery, cornichons, pepperoncini, a hard-boiled egg and a Peep!

Viva wasn’t allowed to taste this one, but she found the impaled peep both cheerful and alarming.

You’ve survived another year of egg hunts, dressing up for church and family dinner with election year arguments. Get rid of those Peeps while treating yourself to one of these esculent concoctions. Happy Easter!

*Peeps, to my mind, are undergoing the same crisis as the Martini. Martini’s are supposed to be gin, Peeps are supposed to be chicks (that’s why they’re called “Peeps”), but most people order vodka Martinis and buy bunny Peeps these days, undeniable indicators of our society’s imminent collapse.

**What would Easter be without Peeps? Merely a celebration of the fulfillment of Judeo-Christian prophecies ushering in the eternal salvation of mankind? Snooze.

***That’s why this blog is essential weekly reading. They should really make chocolate versions of me at Easter. I’m basically saving the holiday here.