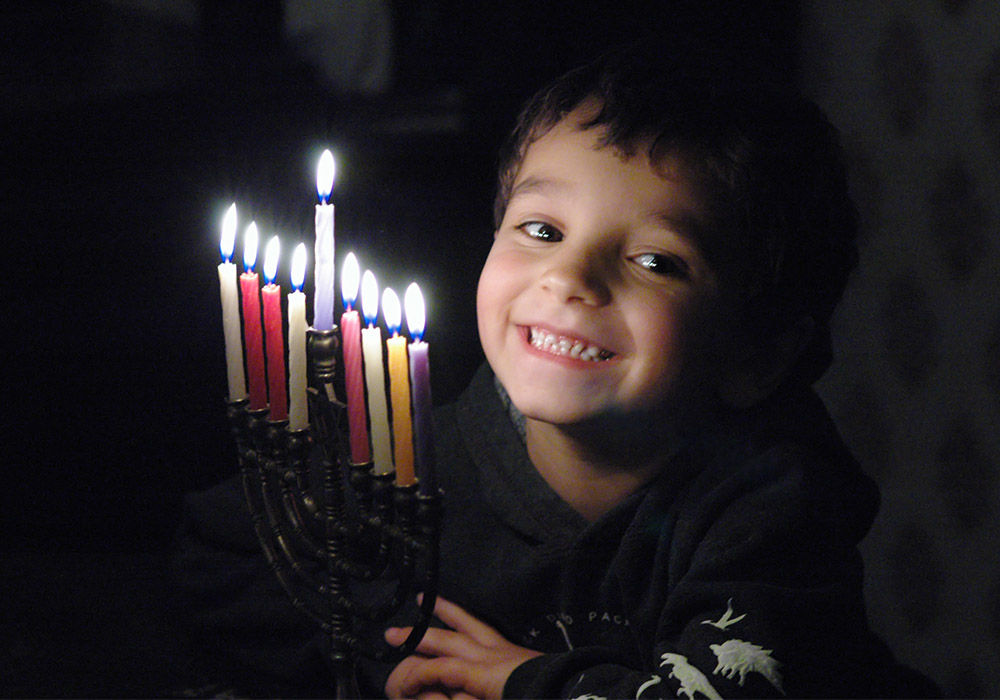 When you see a menorah this Hanukkah, look deeply into its lights. If you look carefully enough, you can find a timeless message in its eight candles.

The small Jewish army known as Maccabees were greatly outnumbered and out-armed by the mighty Syrian-Greek army. With fierce determination, a lot of faith and plenty of prayers, the Maccabees succeeded in defeating the occupying army. Teach your children that nothing is impossible.

2. Our children are our future.

The Jewish people had been forbidden to fulfill the commandments and study the Torah under the penalty of death, yet the children were undeterred. When the Greek soldiers approached, they hid their scrolls and began playing with dreidels until it was safe to resume their learning. Without our children continuing our ways and passing on our traditions, we have no future. Instill your beliefs in your children, make them feel proud of who they are and where they came from. Then they will know where they are going.

3. Everyone can do their part.

A woman, Yehudit, played a pivotal role in defeating the Greeks when she infiltrated the enemy camp and beheaded the powerful general Halifornus, leaving the army in disarray. We each have something to contribute to the world. Find your mission and role in life and do your best to fulfill it.

After defeating the Greek army, the Maccabees returned to Jerusalem to clean and rededicate the Holy Temple. They found only a small amount of pure oil to light the menorah, not enough to last until more could be made. Yet, a miracle occurred: the oil burned for eight days. There are miracles around us all the time. Some miracles are hidden and others are in the open. Open your eyes and see them.

5. A little light dispels much darkness.

The menorah is lit at night. Go into a dark room and light a candle. It’s amazing how far that little light spreads. Be a candle; light up the world around you. Those rays of light go farther than you think.

6. Always try to increase your kindness and goodness.

The first night of Hanukkah, one candle is lit. The second night, two. We increase nightly until all eight candles are lit. Like the candles, always increase in the good things you do. There’s always more we can achieve.

Though many people light their menorahs with candles, the ideal way to light the menorah is with olive oil. Have you ever mixed oil with other liquids, such as water? The oil rises to the top. Be like the oil. Don’t dilute your values. Even when the world around you seems dark and confused, do what you know is right.

Try a latke, a potato pancake cooked in oil. Top it with applesauce or sour cream for a traditional treat. Or try Sufganiyot, jelly-filled doughnuts. Throw some chocolate coins, gelt, for the children. Nourishing the body makes everyone happy.

And what about the tall candle on the menorah? It is call the shamash and it lights the other candles. Be like the shamash and light up those around you. Those people will in turn light those around them. Like the dark room with one little light, spreading your light will make the entire world around us brighter.