These fun spots are worth the visit if you're looking for something new to do. 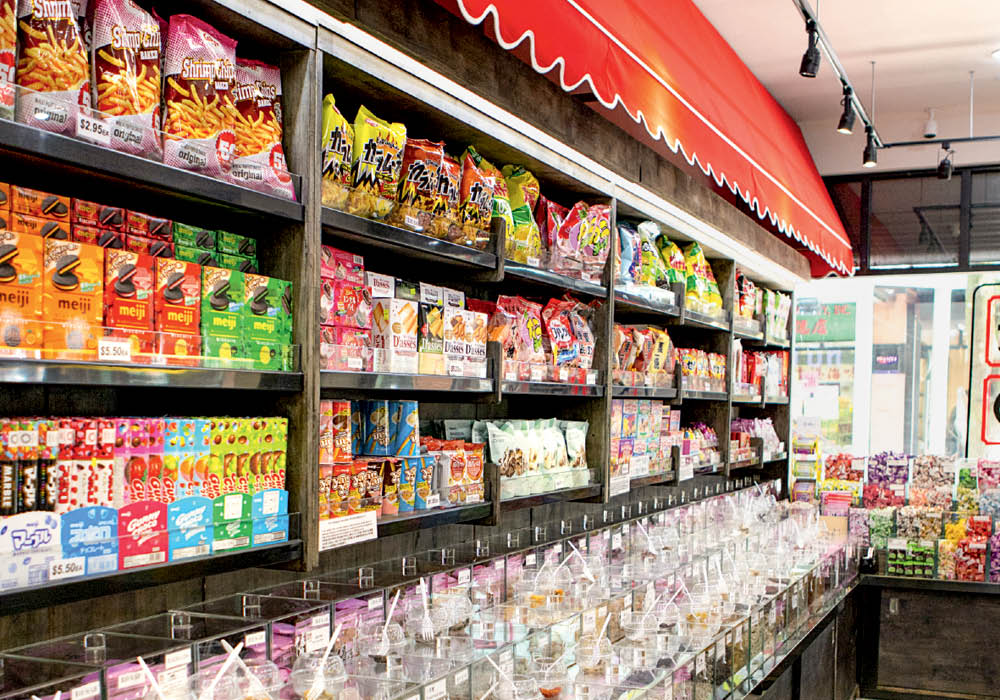 If you’re eager for a family adventure, Chicago is filled with historic, wacky and wonderful gems tucked away in hidden corners — or hiding in plain sight. Here’s where to find them.

Aji Ichiban transforms the typical penny candy shop visit. Yes, you still take a small, white bag and examine the colorful rows of candy-filled bins for your favorites before heading to the register to have your loot weighed. But the favorites here are decidedly different.

Grab your passport, your taste buds are about to embark on a sweet adventure. At this, the U.S. flagship for one of the largest snack companies in Hong Kong, candies of all shapes, sizes, colors and flavors–salty and sweet–fill the shelves and the bins to the brim.

Forget boring, old chocolate or caramel and give kumquat pellets, dried cuttlefish, super-salted plums, crispy baby crabs or tomato gummies a try. Shredded squid and shrimp crisps are other popular picks. Even the American brands featured here take on altogether new and interesting flavors: KitKats are filled with layers of pureed sweet potatoes; Oreos trade their vanilla creme with matcha; Lay’s Potato Chips arrive sprinkled with Kyushu seaweed. Be sure to taste the Lychee hard candy, the kiwi chewing gum and Botan Rice Candy (its wrapper melts in your mouth!).

In the late 1800s, George Filbert delivered milk, ice and coal to homes in the South Side’s Bridgeport neighborhood by horse-drawn wagon. George’s son, Charlie, loved root beer, and was just in time for Prohibition when he created his very own recipe for the root-sourced, alcohol-free beer.

More than 90 years later, fourth generation family member Ron Filbert continues to make his family’s famous root beer from the same South Side soda pop factory. Not only can you count on having a taste of old Chicago via the namesake brew, you can also watch it filled onsite in this factory that looks pretty much the same as it did when it began selling the popular bubbly beverage in roaring ‘20s.

Bookworms big and small will want to make a beeline to Chicago’s amazing American Writers Museum, where a surprise bookshelf brings the words of diverse American writers to life through touch, sound and even smell.

Located in the museum’s Nation of Writers Gallery, this one-of-a-kind, 85-foot-long bookshelf celebrates the diversity of writing forms, from novels to song lyrics to comics and more, from America’s most iconic authors. Open up one of the 100 illuminated book placards and expect to be surprised: flip Stephen Foster’s cube to hear “Oh! Susanna,” flip Harper Lee’s to hear the sounds of a mockingbird, open Julia Child’s to smell cookies fresh from the oven, Fahrenheit 451 by Ray Bradbury flips to reveal books on fire. 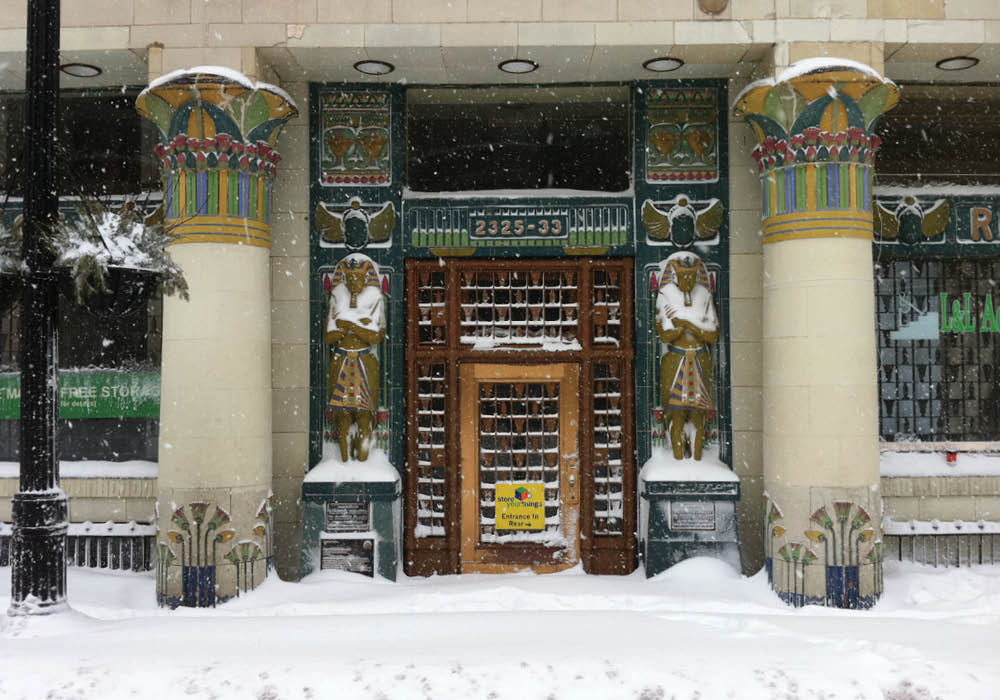 When British archaeologist Howard Carter discovered a step leading to a hidden tomb in the Valley of the Kings in Egypt in 1922, he set off Egyptomania, a renewed interest in all things ancient Egypt.

Around that same time, in Chicago, the Reebie Storage and Moving Co., owned by brothers John and William Reebie, was planning a new building. The brothers, inspired by Egyptian Revival architecture, decided to construct an ancient Egyptian temple of their very own, smack dab in the middle of the north side neighborhood of Lincoln Park. As Arthur Reebie, William’s son, noted, “The Egyptians were the first moving and storage men. They floated the grain down the Nile and stored it against the lean times of famine.” Fittingly, the moving and storage company’s logo became a Pharaonic sphinx’s head.

The building’s design was based on two ancient Egyptian temples, Dendera and Edfu, erected about 200 B.C. by Pharaoh Ramses II. Note the two statues of Ramses, representative of the two founding Reebie Brothers that flank the entrance.

Take a tour of the colorful Pullman-based factory and you’ll see the soapmaking process in action. You’ll also learn how pioneers like Method are working to find solutions to climate change.

Kids will be mesmerized by the carefully orchestrated manufacturing process and the thousands of interesting shaped bottles marching down the assembly line.

The certified LEED Platinum factory is located on 22 acres of land, much of which is a wildlife and natural habitat. A 230-foot wind turbine makes electricity. Three 35- x 35-foot solar tracking trees in the parking lot also gather energy. Method’s plastic bottles are made on site out of recycled materials.

Group tours are held at 9:30 a.m., 11 a.m. and 1 p.m. every Wednesday. To reserve a spot, email soapboxtours@peopleagainstdirty.com or fill out the online form at methodhome.com/beyond-the-bottle/soap-factory. A minimum of one-week advance notice is required.

Beware of the hairy, green monster that lives in the West Loop. Approach his residence with caution: whenever he senses the smell of an approaching little kid, he heads straight to his massive front door and glares from behind the windowpane, hoping to scare any potential toy robbers away. Brave children who stand at his doorstep and peer into his googly eyes can expect to have their perspective magically altered.

Chances are you or your kids have played with a toy that grew out of the minds of some of the non-monsters that work in this playful building: Big Monster Toys designs, engineers and prototypes toys and games for big names in the toy biz: Mattel, Moose, Fisher Price and Hasbro to name a few.

Founded in 1988 by three former partners of the legendary Chicago-based toy design firm Marvin Glass & Associates, Big Monster Toys stands as one of the few remaining toy manufacturers operating in the city. The unique door is a brilliant reminder of the unexpected, unrequited joy of toys. For a truly Alice in Wonderland experience (and a great photo op), see if you can jump up and grab the monster-sized doorknob. 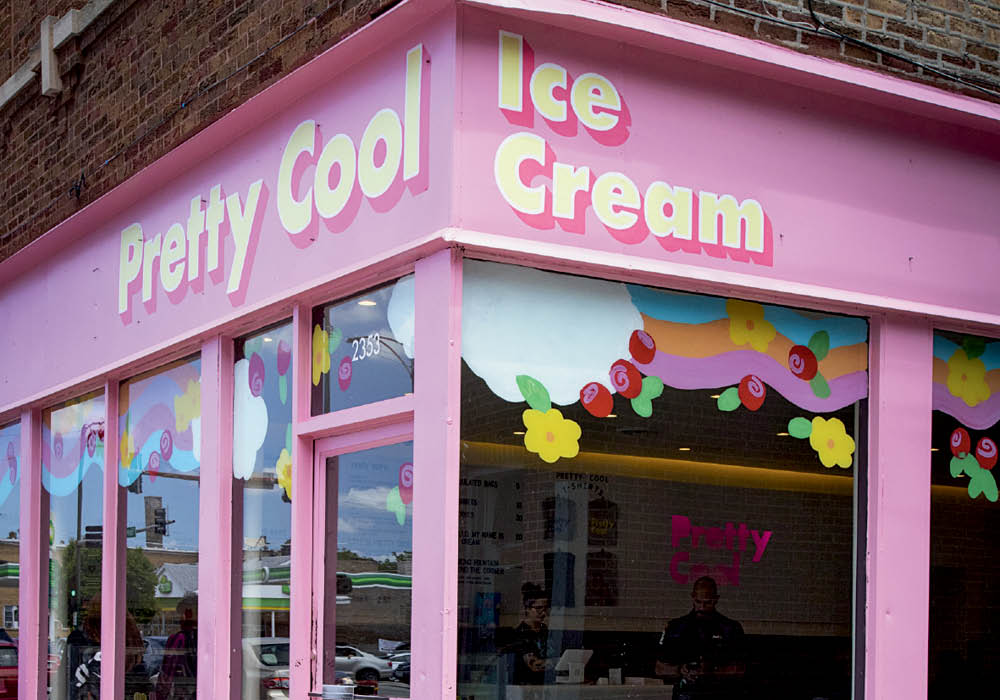 Celebrate your cool attitude with a rainbow of icy treats at Pretty Cool, a whimsical, colorful, playful and just plain cool ice cream shop that doesn’t sell by the scoop.

Instead the 50+ ice cream novelties are a gourmet take on what you’d find on an old-school Good Humor Truck, served skewered with a wooden Popsicle-style stick.

For more Chicago insights, check out Amy Bizzarri’s new book 111 Places for Kids in Chicago That You Must Not Miss.

This article originally published in Chicago Parent’s February 2020 issue. Read the rest of the issue here.

Most parents don’t know that any school can call itself Montessori. We talked with one of just two AMI Recognized Montessori schools in Chicago to learn why this accreditation matters.
Read more
Guides

What’s the secret to igniting a love of learning in your child? An appropriate early learning environment offers many advantages of preschool, says an expert from Smart Love Preschool.
Read more
Indoors