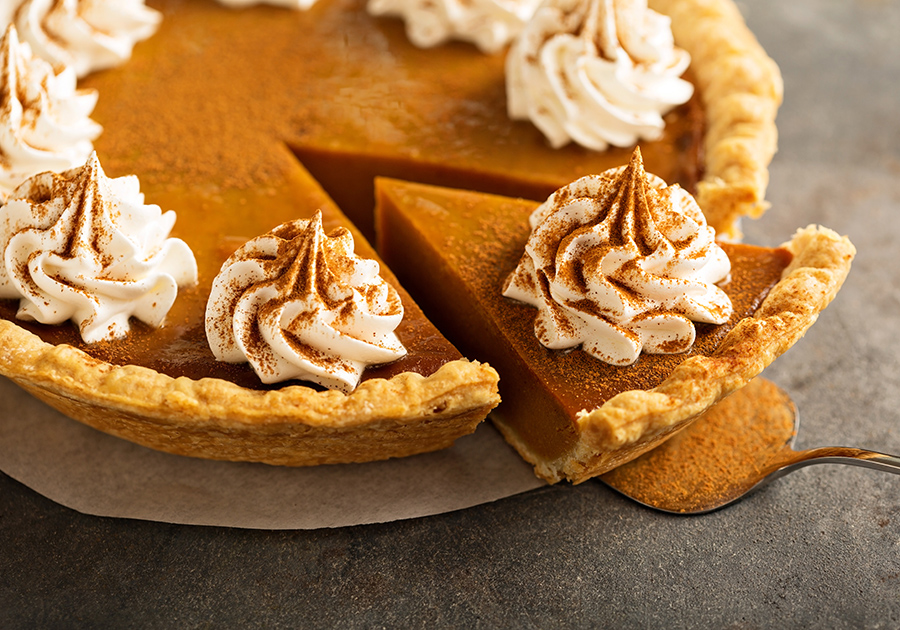 Ladies and gentlemen, in case you were unaware, Eating Season has commenced. Eating Season is my term for the time of year when we Americans have decided to put down all the delicious, fattening, carb-loaded foods we eat throughout the year and pick up even more delicious, fattier, carb-ier foods for a solid three straight months. This time of year runs from the first bag of Halloween candy you purchase and “accidentally” eat in its entirety before the trick-or-treaters arrive through the Super Bowl when we can no longer even bear to chew after all of our delicious festivuses (festivi?) and thus consume our calories in semi-congealed dip form.

This is all a feeble attempt to explain away how I found myself baking two separate pies two weeks before Thanksgiving, covered in filling, muttering to myself something along the lines of, “The spirit of Eating Season is upon us!”

I have been reading a lot recently about how perhaps some of my preconceived pie notions might have been misplaced, particularly around the root vegetable custard variety. In my mind, pumpkin pie has always been the champion of the holiday pies, which is to say, the champion of the holidays. However, an old timer seems to be making a comeback in the food blog world: the sweet potato pie. Dormant for years and not much consumed outside the Southeast United States, sweet potato pie is having a moment, and people are claiming we’ve been doing this holiday pie thing wrong all along.

I had to know. Could sweet potato pie dethrone my beloved pumpkin pie? Had I been consuming the wrong pie all along? Was I living in the Upside Down and had no idea? Will? Are you there, buddy?* What kind of pie are you eating??

Reading wasn’t doing it for me. I had to know. I decided to bake one of each pie and assemble a panel of taste testers with impeccable qualifications to finalize this debate once and for all: pumpkin versus sweet potato pie. Mano a mano … er … pie-o a pie-o?

The theory behind this sweet potato upstart goes something like this: if you were to roast up pieces of pumpkin and pieces of sweet potato in the oven, which would you want to eat? The sweet potato, obviously. Pumpkin by itself doesn’t have much taste, let alone taste all that great, while roasted sweet potatoes taste objectively delicious. It’s why pumpkin “spice” is a thing; you need a lot of spices to make pumpkin taste good, or even like anything at all. If you started with something delicious that is in the same family (the sweet potato, in this instance), perhaps those same delicious spices would be even more elevated. The theory made sense on paper. Now on to the practical part of the exam.

For consistency, I used the same exact crust (store-bought, because I am a terrible pie crust maker and Chicago’s pie game is so strong I actually don’t have huge motivation to learn), made my own whipped cream, and used two recipes from the same food blog/website, The Kitchn** because they have quite literally never led me astray and because they are bound to have similar taste aesthetics and be classic and delicious representations for objective tastings.

So on to the pies! First, let me introduce our distinguished panel.

Me: The maker of the pies

Esteemed qualification to sit on the tasting panel: I made the dang pies and it is against every moral fiber of my being to make pies without eating them.

Pies eaten during the holidays growing up: Pumpkin. Mrs. Smith’s frozen pumpkin pie, to be exact. My mom was not a baker.

Bias for one pie over the other going in: Pumpkin.

Esteemed qualification to sit on the tasting panel: Was roped into this by his wife. Also Southern, which means he may have a genetic disposition to liking sweet potato pie.***

Pies eaten during the holidays growing up: Pumpkin

Bias for one pie over the other going in: “Pumpkin is my favorite pie of all the pies. Also, please don’t write that thing about my genes predisposing me to liking sweet potato pies. That’s stupid.”

Esteemed qualification to sit on the tasting panel: Pie-loving pregnant person, which is by far the most legitimate qualification of any of us.

Pies eaten during the holidays growing up: Pecan and apple

Bias for one pie over the other going in: Never had sweet potato pie, but has an inclination she will like it better than pumpkin pie once consumed.

Esteemed qualification to sit on the tasting panel: There is no way we could all sit around eating pie and not give him some because that’s just cruel.

Pies eaten during the holidays growing up: Pumpkin … so far?

Bias for one pie over the other going in: “I like pie.” Fair enough.

Now that we’ve introduced our panel, let’s get on with the actual taste test. I put the appropriate amount of whipped cream onto the pie slices (which is precisely “just a tad more whipped cream than is socially acceptable to eat in one sitting”) and serve them up. First up, the pumpkin pie.

Everyone takes a bite with an appropriate reverence toward both pies and the task at hand. “Delicious, classic pumpkin pie,” Kayla decrees. “A perfect representation of a pumpkin pie,” Chris says. I try to stay calm and make a note to toot my own horn later for pie success. (Toot!)

Undoubtedly, this pie is delicious. The spices all harmonize upon the backdrop of a lightly roasted root vegetable and meld together with the crust to make a great combination. What more could you ask for during the holidays?

This pie is fantastic. But can it be dethroned? Let’s see.

We all move onto the sweet potato pie.

This pie is much more orange in color than the pumpkin pie and looks more appetizing than the pumpkin. My hopes are high for my world to be turned on its head and to have discovered something even more worth my time and effort in the holiday dessert world.

We all bite in.

Chris starts: “It’s good and a wonderful representation of sweet potato pie, but I like pumpkin pie better.” “Anything else, Chris?” “Nope, I just like the other one better.” Helpful.

Kayla chimes in with the comments of someone who actually cares to be useful. “It’s milder, interestingly. The pie transforms the vegetable, so pumpkin becomes something delicious, but for some reason it doesn’t translate very well.”

I have to agree with both of them. It seems as if all the spices fought a war with the flavor of the sweet potato and they all ended up giving up. While not inherently bad in any way, the sweet potato seems to overpower the spices.

Connor’s reaction was scarcely more helpful than my husband’s: “Good!”

The conclusion: I had high hopes for the sweet potato pie, but the winner in the root vegetable custard pie head to head competition was clear: pumpkin pie still reigns supreme.

Looking back on it, the combination of spices and creaminess is what we actually like eating in the pie, whether we realized it or not. Something neutral that could carry those classic spices with a great custardy texture won out over competing forces of natural tastes and spices it needs to heighten. Sweet potato just can’t handle sharing the spotlight, and pumpkin is the ultimate team player.

So there you have it. A head-to-head matchup, a holiday pie battle royale, if you will, with one clear winner: pumpkin pie.

*For those who caught that Stranger Things reference and want to know, I am on team “Episode 7 was terrible” and am embarrassed that it took place in Chicago because we have enough to do to recover our reputation without that added on. And now back to pies.

***This should go without saying, but please do not get your scientific genetic information from a parent blogger because you will be led vastly, vastly astray.

Brought to you by German International School Chicago
Read more