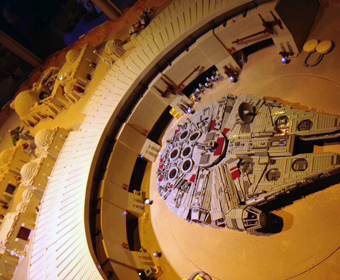 I can be a city snob. I believe Chicago has all the culture and museums that we need. Except for my kids favorite place, LEGOLAND Discovery Center in Schaumburg.

My family was invited to the opening of Star Wars: Episode IV – A New Hope exhibit on a Thursday night. My son recently finished watched all of the Stars Wars movies and I knew this was not to be missed.

After a long day, driving to Schaumburg in the dark was not at the top of my lists, but there was no way my kids were going to let me get out of this. It was all they talked about all week long. (Mental note not to bring up exciting events weeks in advance).

The walk-through exhibit offers an intergalactic immersion into the sights and sounds of “Star Wars: Episode IV – A New Hope.” Young Jedi attending the event can help the Rebel Alliance destroy the Galactic Empire’s powerful Death Star, experience the epic duel between Obi-Wan Kenobi and Darth Vader and watch in awe as the Millennium Falcon rises from the deserts of Tatooine.

The display replaces the Center’s previous Star Wars Miniland, which featured scenes from “Star Wars: Episode I – The Phantom Menace.”

While we were there we enjoyed the 4D Cinema (saw two movies), enjoyed two rides, admired the Chicago skyline made up entirely of LEGOs and my kids built their own LEGO creations.

My kids were in heaven running from exhibit to exhibit and clearly so happy to be there.

Looking at their ecstatic faces light up reminds me why we keep making the trip back to LEGOLAND for more!

Chicago Parent Staff -
Grab some snacks and enjoy these fun family flicks at a park in the city and suburbs.
Read more
Attractions