Chicago mom: Rainbow Looms are for boys, too 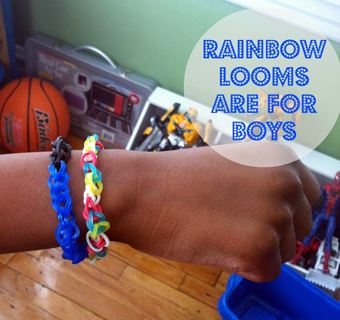 I’ll never forget the day my son asked me for a Rainbow Loom. I picked him up from his after school program and he began rattling off non-stop about why he had to have a Rainbow Loom and how it would make him a better person.

That weekend we headed to our local Michael’s and were greeted by a massive Rainbow Loom display surrounded by a mountain of rubber bands. Luckily my son knew just want to do and picked out his kit and some rubber bands before I could blink. When we got home he ripped open the box and we spent the rest of the afternoon watching YouTube videos on how to create the masterpieces he’d seen at school. There’s nothing like seeing a furrowed brow on a seven year old. It’s magical to watch your child focus so intensely on something and reach their goal. A bracelet. Then a necklace. And then more bracelets. Time for more rubber bands.

My son was excited to wear his creations to school and make them for friends and family members. It had become the thing to do among his friends, making bracelets for each other. Who says boys aren’t nurturing? I’ll admit that I get discouraged when we stop by a Rainbow Loom night at the library or craft store to find the tables filled with girls. A colleague shared that her ‘burb has a Rainbow Loom night just for boys. I thought it sounded like a good idea. Then I wondered why we felt the need to separate jewelry making by gender. Are the adults messing this up for the kids?

Yes, my son’s color choices are influenced by his favorite football teams. Yes, he’s made a light saber out of his rubber bands. He’s even decided to make several Denver Bronco themed bracelets for a Super Bowl party we hope to attend this weekend. He’s creating and thinking about others. I couldn’t be happier.