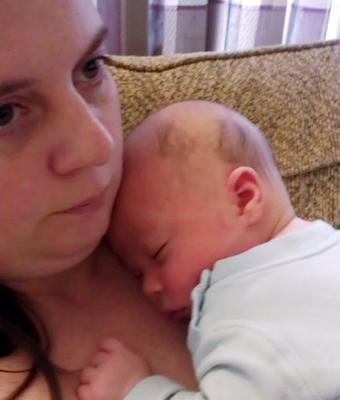 When I became a mom for the first time everyone told me that I needed to trust myself; that I would know what was best for my baby.

I tried. I listened to my gut. It told me that my baby would stop breathing at any moment; that if I didn’t watch him every second of the day and night I wouldn’t realize it had happened until it was too late; that I need to protect him by making sure that I saw him breathing until he stopped so I could get him help the second it happened.

Moms and soon-to-be moms are warned of the possibility of Postpartum Depression, but a new study from Northwestern University found that many new moms may also suffer from Postpartum Obsessive Compulsive Disorder. In fact, as many as 11 percent of moms experience significant OCD symptoms.

I knew a lot about PPD. I never heard of Postpartum OCD until recently. I happened upon an article about it and read it out of curiosity, only to find it was describing me. I kept reading more and all the articles described it the same way: the natural mother’s instinct going haywire. When mothers suffer from OCD their perfectly normal urge to protect their child gets amplified. Sometimes, it even gets twisted around so that they are worried that they may cause harm to their child. These obsessive thoughts, and the compulsive behaviors they lead to, cause anxiety and interfere with daily life.

PP OCD affects people differently. For me, PP OCD meant selling the beautiful bassinet I insisted we buy without using it because I couldn’t see my son while I was lying in bed. It meant that for the first six weeks of his life he slept on my chest all night while I reclined on the couch. It meant when I finally did allow him to sleep away from my skin that I had to sleep on my right side all night for six months so that I never had my back to my son, even when I was sleeping.

I didn’t trust anyone to care for him without me around. I knew they all loved him and did a great job of caring for him – most of them could soothe him better than I could – but they didn’t have the same fears that I had. They thought it was OK to lay him down to sleep and leave the room, or drive in a car with him and not check repeatedly to make sure he was breathing. I didn’t trust them to be as vigilant as I was.

Even if I had trusted anyone, being away from him was agonizing. As much as I wanted a break, every second I was away I was consumed by fear that something horrible was happening and I didn’t know.

I read a message board that talked about one woman’s experience with PP OCD and she described it like hearing alarm bells all the time — it seems like the perfect description to me. I felt constantly on edge, constantly alert and constantly in fear because these internal alarms would not stop. I didn’t know what fears were reasonable and what fears weren’t.

The Northwestern University study will hopefully lead to other studies about how to recognize mothers affected by Postpartum Obsessive Compulsive Disorder and ways to support and treat them.

Have you experienced symptoms of Postpartum Obsessive Compulsive Disorder? How did you deal with it?