Chicago dad: How to make the most out of Monster Jam 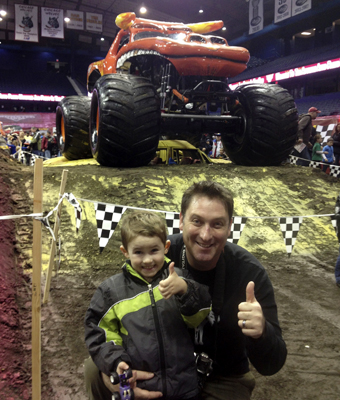 If you’re a kid, this week is about as good as it gets without actually getting to wear cotton candy pants! The Super Bowl was Sunday, the Winter Olympics start on Friday and Monster Jam is back in town for it’s annual high flying action packed visit to Rosemont.

Full disclosure: Three years ago, I had no idea what Monster Jam was. Then my two-year-old son began watching the show on Speed Channel and before you know it, we were hooked. We now have 40 different Monster Truck toys all over our house and a DVR filled with Monster Jam shows.

At first I only half watched them with my son as I tried to stay awake at 5:00am. I have to admit it sucked me in. Monster Jam is an action-packed show, that is well produced, with captivating characters, tons of energy and an ever evolving set that takes a beating, literally. It’s much more than “good ol’ boys” driving around in their F150’s.

It’s not just a “boy” or DAD thing. Last year I took the teenager (girl) and she enjoyed it as much as the boy. So we are going back this year and taking WIFE. Now that we have been once DAD wanted to share some tips on how to make the most out of Monster Jam.

Parking – This has nothing to do with the show or the producers, but it will help your general sanity. Normally you want to park as close to the building as possible so you can get in quickly. Don’t! Getting out is a little hairy, since there is no real traffic pattern and tons of parents all driving crazy. DAD is parking at the farthest away spot as close to the exit as possible. When the show is over we may have to walk a little, but we will be out in no time.

Okay, you’re inside, now the good stuff starts. You have two big choices: Pit Party or Autographs? DAD says go autographs first. The line is a little longer, but the drivers are only there for a certain amount of time and you don’t want to miss this opportunity. The drivers are incredibly friendly and will sign just about anything you hand them. My son brought his official Monster Jam car carrying case and the drivers all signed it. It’s now one of his favorite mementos from the show and it was free . . . kind of.

QUICK TIP – Last year I didn’t tell my son what we were doing because I wanted to surprise him. When he was face to face with his favorite drivers it became so overwhelming that he took off running and crying. To him it was like meeting Justin Timberlake (to me). Let your kids know what you are up to.

The Pit Party! – As cool as meeting the drivers is, “meeting” the trucks is even better! All of the Monster Jam Trucks are on display for you to check out, take pictures with and enjoy. Grave Digger, El Toro Loco, MAX D and plenty more, massive shiny monsters ready to roar into action.

The show – Bring ear plugs! You can forget your wallet and survive, however you cannot survive without ear plugs. DAD went to Walgreens last year and bought a bunch. A box of 20 ear plugs at Walgreens costs about five bucks. The show is loud, very, very loud. I can’t imagine making it through without protecting my kids ears. That being said, the organizers are awesome about allowing you to bring in noise cancelling headsets. They sell pairs there if you forget.

Take it all in. The stadium seems to shrink when you fill it with trucks flying 30 feet in the air. There is no such thing as a bad seat.

In normal life, if you are driving a $175,000 vehicle, you are making sure no harm comes to it. In the world of Monster Jam, flying through the air and cracking them up is a part of the show. It’s something Kremel and the other drivers try to do!

“I do what I can to please the crowd, to get them excited,” Kremel says. ” When we are driving, you can hear the crowd cheering, it gets you pumped up, to go a little farther, push a little harder.”

Though these trucks come crashing down from dizzying heights, the technology to keep the drivers safe is state of the art which is something I pointed out to my kids, “They are safe, they are wearing seatbelts.”

“It doesn’t hurt as much as you think it would. We have 5 point safety harnesses, helmets, custom seats and plenty more that keep us safe and secure,” Kremel shares. “It feels more like the day after you play tackle football with your buddies, you’re a little sore, but no big deal.”

This weekend Monster Jam is rolling back to the All-State Arena in Rosemont. There’s still time to join in the fun and jam along with Monster Jam.