5 things to be thankful for this Star Wars Day 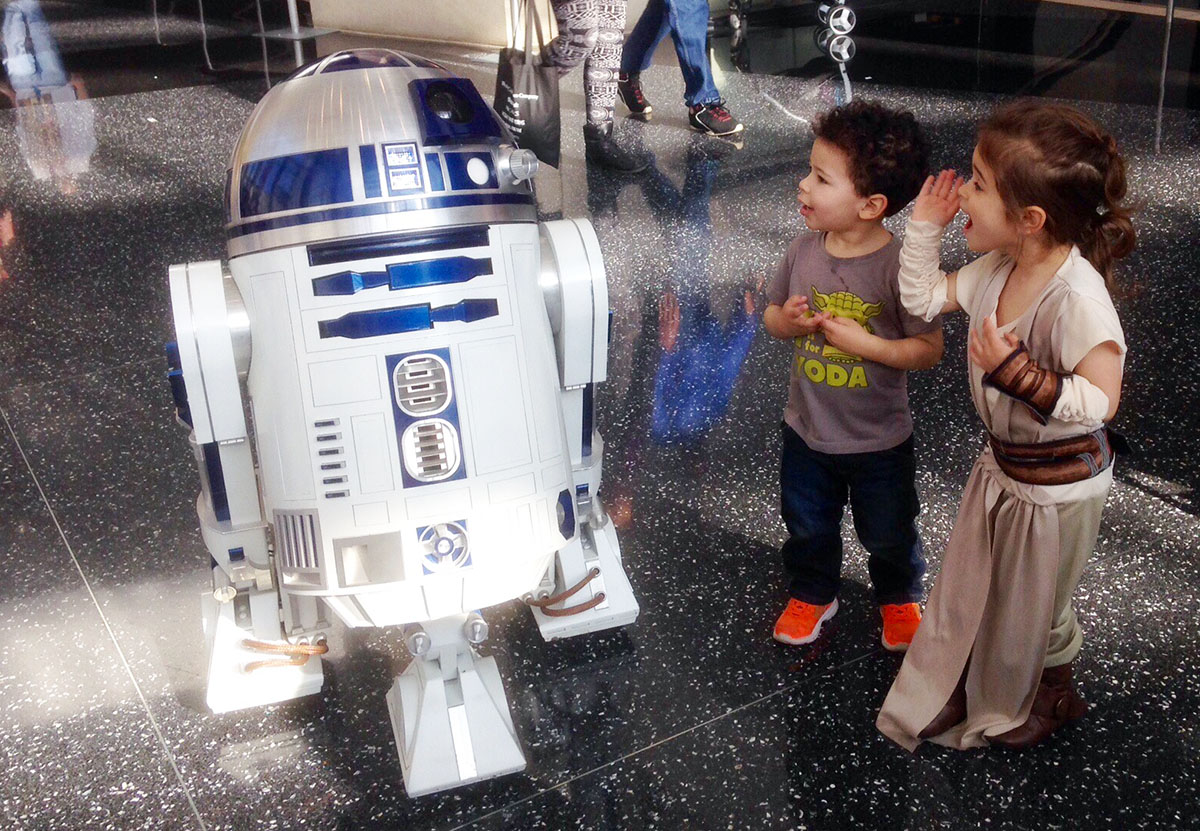 This week’s blog post is by The Paternity Test co-host Matt Boresi, who lives in the Edgewater Glen neighborhood of Chicago with his wife (“Professor Foster”) and their 4-year-old daughter Viva, who recommends that judge her by her size you do not.

May is that glorious month where the weather gets good, the gardens get planted and we all come together as a family to celebrate our core values on a special holiday known as … Mother’s Day, you say? Well, that’s lovely, and everyone enjoys a good brunch, but that’s not where I was headed. Memorial Day? It’s crucial to remember our fallen troops, as well as open the beaches and pools, but that’s not what I meant, either.

Tomorrow is May the Fourth, as in, “May the Fourth Be With You,” as in, Star Wars Day! That annual holiday, not created by candy manufacturers like so many other lame holidays (Sweetest Day and Easter, I’m looking at you), but rather a holiday driven by fan love and a terrible pun. It’s a secular, international, nearly 40-year-old celebration of what our world trusts and loves the most–brands. In this case, the most trusted brands of all, Disney, Lucasfilm and Hasbro.

I’m not sure if gratefulness is actually an intended part of Star Wars Day, but let’s look at five things we can appreciate this year, and some ways to celebrate the day.

A common denominator for multiple generations

Since the late ‘70s, people all over the world have found an entertaining way to ignore everything from earth war to actual global catastrophe by transporting themselves into a world of space war and pretend global catastrophe. A world of disco astronauts, violent muppets, questionable CGI and Harrison Ford. Almost everyone loves Star Wars, so it’s a way to talk to other dads at the park, to co-workers about which you agree on nothing else, to Millennials about something besides their underachievement and crushing ennui (to be fair, they grew up with the prequels, so I can see why they are a lost generation) and to children about something besides Frozen and scatology. It’s also a great litmus test for whom not to trust. Don’t like Star Wars? I don’t have time for your phony-baloney self-conscious contrariness. Kindly step aside.

If you’re wondering what to do besides watch your new Blu-Ray (Rey?) of The Force Awakens tomorrow, put “Star Wars Party” into Pinterest and find ways to plate cinnamon buns as Leia buns, to dip pretzels into chocolate to make edible lightsabers and so much more.

Oh, and if you’re using cookie cutters to make Star Wars characters, remember that JJ Abrams lack of imagination is your friend and Yoda can be re-frosted into Maz, Vader into Kylo Ren, and C3PO into C3PO with a strawberry arm.

Thanks to Star Wars, we will never lack a way to spend money again. George Lucas not only created compelling films, he also created a new level of merchandising, and ever since Saturday morning commercials of children shouting “Wampa! Wampa!” in their backyard, we’ve been hooked. If you know someone who enjoys Star Wars (which is to say, anyone worth knowing), there will ALWAY be something to buy them, from lightsaber barbecue tongs to Chewbacca adult onesies.

A reason the stop watching the prequels

If you don’t have a party for any other reason tomorrow, have it because with the new movies and cartoons out, there’s enough Star Wars media in this world now that you never have to watch the prequels again. (Or those Ewok TV movies with Wilford Brimley, if you’re still watching those.)

Seriously, as much as I love Ian McDiarmid’s hammy monologues–and I do–I’d rather hear the “Tragedy of Darth Plagueis the Wise” speech than the Henry V “St. Crispin’s Day” speech any day. I tried to watch the Yoda/Count Dooku fight with Viva the other day but she got bored and walked away, leaving me to watch lightning shoot out of an arthritic Christopher Lee while Ewan McGregor intermittently pretended to sleep. We haven’t lived in such a rich Star Wars time since Pepperidge Farms first started making those cookies shaped like Darth Vader that tasted like ashtrays. (“The new taste in space!”)

“The Force is what gives a Jedi his power. It’s an energy field created by all living things. It surrounds us and penetrates us; it binds the galaxy together.” Of all the pseudo-religions and self-help systems invented in the ‘70s, the Force is by far the best. It helps us find an alternative to fear and hatred, it helps us do or do not (never try), it lifts fighter jets out of swamps, wins pod races, bulls-eye targets smaller than two meters and beats the snot out of Adam Driver. If that isn’t worth celebrating, what is?

Make sure to take some time to enjoy Star Wars Day tomorrow with your kids. Watch Han try to outsmart the Guavians and Kanjiklub, buy a Boba Fett-themed Hot Wheels car, hit each other with sticks, and of course, may the Force be with you.