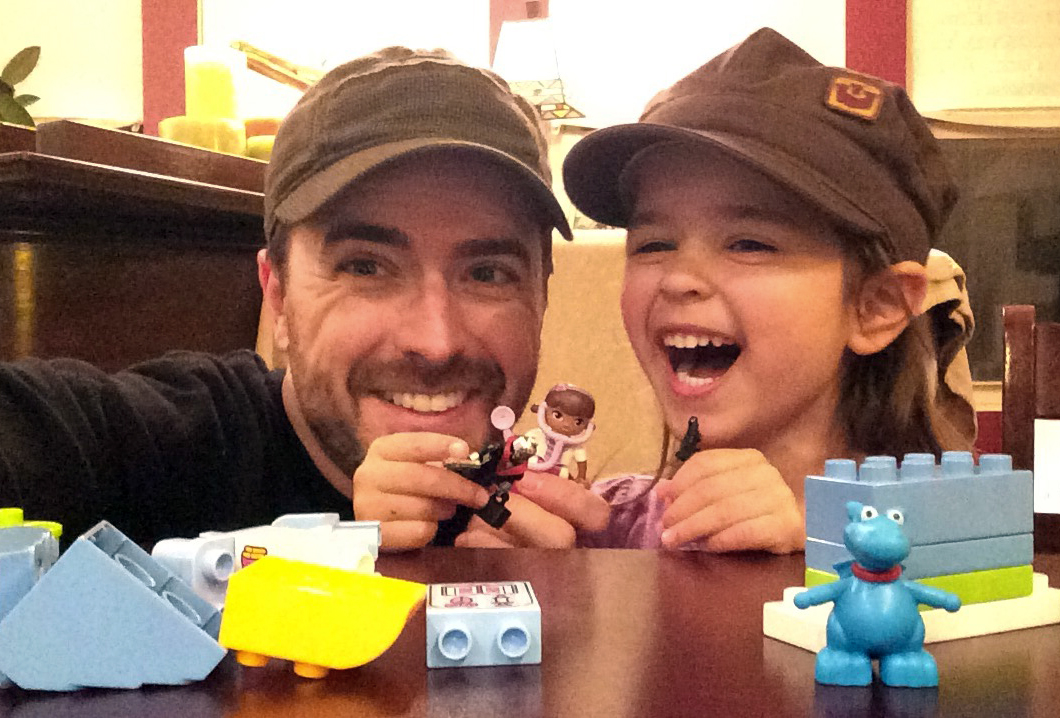 This week’s blog post is by The Paternity Test co-host Matt Boresi, who lives in the Edgewater Glen neighborhood of Chicago with his wife (“Professor Foster”) and their 4-year-old daughter Viva, who is waiting for a Snarky Blogger Dad Lego Figure.

Hot on the heels of Mattel’s announcement of a zaftig Barbie doll and my own suggestions of body positive action figures for dads, Lego has followed the trend of “giving society the realistic toys they demand*” with their first stay-at-home dad Lego mini-fig.

According to Pew, approximately 2 million dads stay home (16 percent of the stay-at-home parent population). Of those 2 million, only three percent are staying home because they want to take care of their kids–the rest largely can’t find enough employment to make it worth leaving the home. That means 97 percent of Lego Stay-at-Home Dads cry softly inside as they watch Lego Working Mom put on her pantsuit legs each day and leave him to his Mickey Mouse pancakes and daytime TV.

Lego SAHD is part of the “City” collection, which is the Lego gender neutral line, exposing him to both sexes. Most of Lego still consists of the “Friends” line for girls, in which the characters largely go to a Lego mall** or meet to discuss Lego Gillian Flynn novels in Lego book club, or the lines for boys such as Star Wars, Marvel and DC, in which boys can learn life skills through playacting violence and murder.***

Lego SAHD looks pretty accurate, with a buffalo plaid shirt and a shaggy beard that says, “I’m happy I don’t have to shave and wear pressed shirts for those jerks at corporate anymore. I’m going to look like an indie rocking artisanal charcuterie hobbyist, finally bond with my offspring, and definitely finish that novel I’ve been talking about since I got that English degree at Iowa. I mean, the kids don’t nap long and there’s a lot to do, and Mommy is tired when she gets home and I can’t just foist the kids off on her but I’m going to finish this novel, man.”

The positioning of Lego SAHD’s eyebrows and the line of his mouth bespeak a nuanced outlook on his new life: “I’m proud to eschew traditional gender roles and to help facilitate my wife’s self-actualization but am slightly embarrassed to have to ask her for cash for a growler on Double Daisy Cutter Day at Half-Acre Brewing.”

Now that Lego SAHD has blown open the doors on non-traditional roles for plastic dads, I’d like to suggest some additional new mini-figs:

Lego APD comes with a stack of term papers covered in his kid’s crayon drawings because he doesn’t have an office in which to do his grading. He also has a preposterously high plastic health care bill from the Cobra policy from his last full-time job and a terminal degree decal he’ll be paying off for 30 years.

This legally separated Lego dad comes with a stack of plastic take-out boxes, a brand new Lego race car bed in the den of his apartment and a quizzical look reflecting his quandary over when to introduce his child to his new girlfriend.

This Lego dad comes with plastic hair that can be removed from a peg on his back and transplanted to his head. He has a Lego Ford Mustang and comes with a Lego Crossfit Gym Playset even though it means he has a 73.5 percent chance of injury while doing fake pull-ups.

This affluent-but-sporadically-present dad comes with Lego cigarettes he hides in his suitcase, a Lego private school for his kids and a deluxe bucket of bricks made of guilt.

This controversial, non-traditional mini-fig comes with a clandestine cellphone, plastic Narcissistic Personality Disorder and a second Lego brick house out of state.

I’m personally happy to see this new Lego SAHD figure and the continued existence of the Lego City collection, and I hope we’ll soon see a Lego Star Wars playset featuring a First Order Tie-Fighter pilot respectfully asking General Hux if he can cut down his commute time to Starkiller Base by working remotely.

* It could be the altruism of the manufacturers, it could be the inevitable free PR from all the think-pieces generated or it could be a reaction to the falling market share of toys to apps and video games. You’ll have to decide if you consider the glass half-full or half-mercenary.

** While girl’s entertainment these days rarely shows females only being as valuable as the men they attract, it now shows a girl’s worth as being related to her ability to compile consumer goods and an opulent lifestyle. I call this “Beyonce feminism,” and frankly, I have no more interest in my daughter being a puppet of “The Man” than I do in her being a puppet of “A Man.”

*** Entertainment still shows boys that we live in some kind of frontier world in which there are no problems that can’t be Respulsor Ray’d, Nunchuck’d or Light Saber’d away when, in fact, we live in a nanny state where running a stale yellow in your Prius leads to a robot mailing you a citation.

If you enjoyed this essay, subscribe (free!) to The Paternity Test Comedy Podcast on iTunes, Soundcloud or visit www.paternitypodcast.com.

Get to know Chicago's Pullman Historic District with these places to eat, play, explore and shop.
Read more
Indoors