Chicago Kindie Rock: The best new music to rock out to with your kids 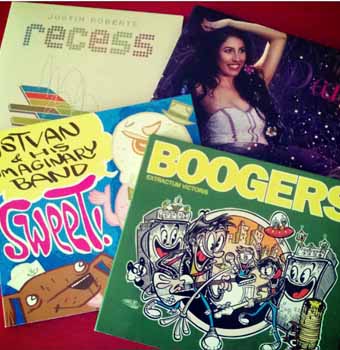 There is great music coming from all over the U.S. for kids and families, but since becoming immersed in the Kindie Rock scene it’s no surprise to me when an album that has roots in Brooklyn, Portland, or Seattle lands on my desk. Those cities seem to represent the East and West coasts as cultural hubs for creating rock for all ages. But what about the Third Coast – right here in Chicagoland? Well, just like our pizza – which everyone has conceded to be the best tasting in the world – Chicago has unique sonic flavors as well. Here’s four recent releases by artists with local ties that you can rock out to with your family right now.

The Boogers are the undisputed kings of Kindie Punk Rock. After bursting onto the scene with 2008’s Road to Rock and 2010’s Let’s Go, the band entered 2013 on the heels of their heaviest album to date, Extractum Victoris (full review here). Fronted by a Ph.D in Developmental Psychology, there’s more to The Boogers than just fine rock jams and they’ve long been my most recommended purveyors of Chicago Kindie.

Technically, Dani lives in Los Angeles, but this Glenview native took her first vocal lessons in Northbrook. She spent a few years working in Chicagoland as a music therapist after studying at the Berklee College of Music. Her debut children’s album, Beauty Land, was released this summer and plays like musical theatre. The 14 track adventure – the tale of Jimmy and Lulu, a brother and sister who find themselves captured by an Evil Witch and are searching for a way to Beauty Land – was written and is narrated by Dani. It’s a little Disney, a little pop-rock, and a lot of fun. My oldest daughter asked if she could watch the DVD but there isn’t one . . . at least, not yet.

Is Berwyn Chicago’s answer to Brooklyn? Svengoolie might be it’s most famous export, followed by The Boogers as its most-rockin’. But the land of the late Spindle has also given us Istvan & His Imaginary Band. On Sweet!, Istvan and the gang deliver a tasty collection of tunes prime for the younger set. The seriously short – 10 songs in 20 minutes – album mixes a little 50’s/60’s rock and roll sprinkled with some punk stylings and acoustic jams. They cover everything from “Germs,” to playtime on it’s “Fun to Pretend,” and how to take care of those “Pearly Whites.”

One of the bigger names on the kids and family scene in Chicago, Justin Roberts, wasted no time in following up his acclaimed 2012 album, Lullaby with a new record called Recess (full review here). Together with The Not Ready for Naptime Players, Roberts delivers a dozen new songs that were great for summer, but work just as well now that school is back in session. Robots! Princesses! Aliens! Trains! There’s a lot to dig on this one and it’s well-worth picking up.